Clemson, S.C.—Second generation Clemson golfers Bryson Nimmer and Colby Patton both had rounds of two-under-par 69 on Wednesday to lead Clemson to a one-under par team score of 283 and a third-place finish at the NCAA Austin Regional at the University of Texas Golf Course in Austin, Texas. Clemson is one of five teams in the 14-team field that qualified for the NCAA National Tournament in Fayetteville, Arkansas, May 24-29.

Host school Texas won the regional easily with an 827 score, 25-under par.   TCU was second at 847, while Clemson was third at 851, one-under-par.  Clemson had scores of 284-284-283 over the three rounds, and joined Texas as the only teams to shoot par or better each day.    Pepperdine (858) and Southern California (860) were the only schools to qualify for the NCAA National Tournament.

Arkansas, the host of this year’s national tournament, finished sixth with an 865 score.  The Razorbacks played the last three holes at 10-over-par as a team to miss the cut by five.  Iowa was seventh at 870 and Marquette was eighth at 880.

Nimmer had three birdies and just one bogey in the final round on the way to his second straight round of two-under-par 69.  It was his 46th career round in the 60s, breaking D.J. Trahan’s record of 45 set between 2000-02.  Nimmer also set the Clemson record for career top 10 finishes.  His sixth-place finish thanks to a 54-hole score of 210 was his 28th career top 10, breaking the mark of 27 that had been held by Kevin Johnson (1985-88).   It was Nimmer’s 10th top 10 of the year, which also tied a Clemson single season mark.

“Bryson was Bryson,” said Head Coach Larry Penley.  “He drove the ball well.  He actually could have putted better, but it was another top 10, which he has done all year.

“The key for us this week was that we got Bryson some help.  Everyone played a part in this (top 3) finish.   Everyone had at least one round of par or better and that was big.”

Patton picked a good time to have his best tournament of the year.  The sophomore had not finished higher than 19th in any tournament this year and he was taken out of the lineup for the final round of the ACC Tournament in the previous tournament after he was the non-counter in each of the first two rounds.   But the son of former Clemson All-American and US Amateur Champion Chris Patton had five birdies and three bogeys in firing his 69 on Wednesday,.

Patton had the best hot streak of the tournament on holes  9-14 as he made five birdies and a par in those six holes to bring Clemson into a second-place standing by four shots.  Patton had 10 birdies in the entire tournament, but five of them were during that stretch on the back nine.   The native of  Fountain Inn, SC was eighth on the team in stroke average entering the regional, but his 211 score was good enough for eighth place in the regional field, his first top 10 of the year.

“I can’t say enough about how Colby played the entire tournament,” said Head Coach Larry Penley.  “He looked like a superstar at times today.  When he made the five birdies he did it different ways.  Sometimes he hit an iron close to the pin, another time he rolled in a 20 footer, then on a par five he hit a great flop shot to get up and down. “

William Nottingham was  Clemson’s third best player on Wednesday with an even-par 71.  He had his round to three-under-par through 10 holes before slumping a bit at the end to finish at even.  “William showed us what he is capable of on the big stage today,” said Penley.  Nottingham finished at 220 for the 54 holes, good enough for 32nd place.

Kyle Cottam and Jacob Bridgeman were keys for the Tigers the first two rounds.   Cottam started with rounds of 70-72 before slumping to a 77 on Wednesday.  The sophomore finished tied for 29th with a 219 score.  Bridgeman shot a 74 on Wednesday, but he finished with an impressive birdie to conclude his 54 holes with a 217 score, good enough for 20th place in the 75-player field.

Overall it was a tournament that gives the Tigers confidence entering the national tournament.   The third-place finish was the best of the spring for the Tigers, who have finished exactly fourth in five tournaments this year.  “The good thing about this is we finished third, but we left some shots out there.  We can play better.   It will be interesting to see what we can do in Arkansas.” 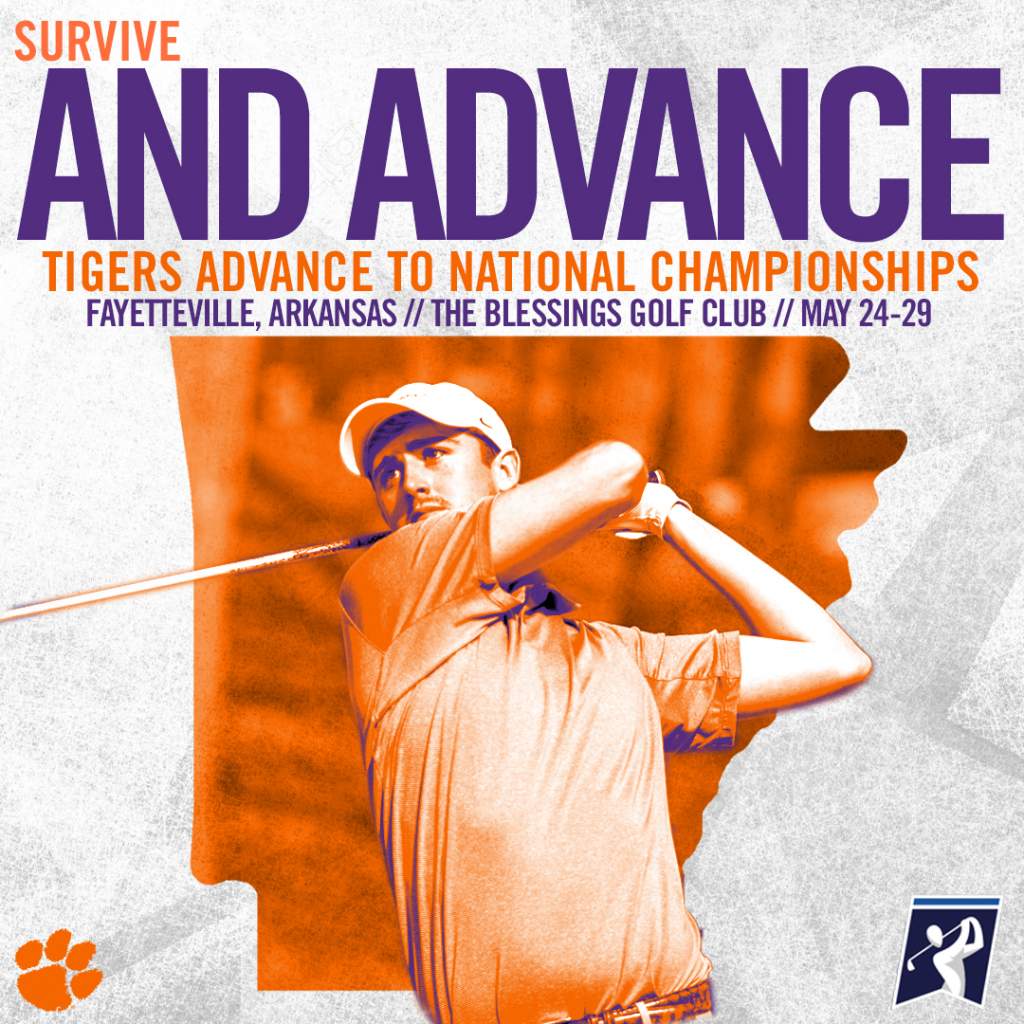