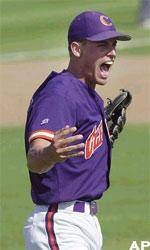 CLEMSON, SC – Micheal Johnson’s eighth-inning homer gave Clemson the lead and B.J. LaMura closed the game as Clemson defeated Arkansas 7-4 on Sunday afternoon in front of 5,218 fans at Doug Kingsmore Stadium. Clemson garnered its second Super Regional Championship and earned a trip to the College World Series for the 10th time in school history. LaMura (6-2) came up big for the second straight day and earned the win by pitching 4.1 innings of one-hit ball while striking out six batters and walking none.

Both teams went scoreless in the sixth and seventh innings with the score tied, but Johnson put the Tigers ahead for good in the eighth. He blasted a towering shot high over the fence in right field for his 23rd home run of the season to give Clemson a 5-4 advantage. Clemson added some insurance runs with two outs in the ninth inning. Zane Green hit a solo homer and then, in his final at-bat at Doug Kingsmore Stadium, Khalil Greene homered to center field to set a new Clemson record with his 26th home run this season. Greene was mobbed by his teammates as he crossed the plate and then threw his batting gloves into the stands in a rare display of emotion.

LaMura retired the side in order in the ninth to secure the victory. Scott Roehl (4-1) got the loss for Arkansas.

Arkansas opened the game’s scoring in the second inning when a fielding error by first baseman Michael Johnson allowed Ryan Fox to score from second. The Razorbacks extended the lead in the fourth off of Michael Conner’s solo home run to left field, his 17th homer of the season, and scored with two outs in the frame on Clay Goodwin’s RBI-single to left field.

Clemson finally got on the board in the fifth and took a 4-3 lead. David Slevin started things with a single up the middle to score one run and Khalil Greene followed with a two-out double to left center that plated two runs. The hit extended Greene’s hitting streak to 33 games and gave him 85 RBIs for the season, a new Clemson record. Baker then capped the scoring with an RBI-single up the middle.

The Razorbacks bounced back in the bottom of the frame and tied the game at four. Conner hit a single off of Clemson reliever Patrick Hogan that scored Kirk McConnell and Arkansas put runners on second and third with two outs before LaMura entered tha game for the Tigers. LaMura, who struck out the only two batters he faced to save Saturday’s game, struck out Nick Pitts to get his team out of the inning and end Arkansas’ last solid scoring chance of the game.

Clemson now advances to Omaha, NE for the College World Series, which takes place June 14-22. The Tigers will face the winner of the Nebraska-Richmond Super Regional at a time to be determined.