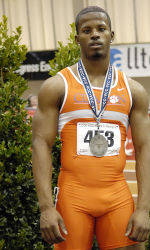 Cleveland, OH – The National Association of Collegiate Directors of Athletics (NACDA) released the second set of winter standings in the U.S. Sports Academy Directors’ Cup on Thursday. Clemson is ranked 44th out of 240 Division I schools in the Directors’ Cup through the completion of 11 winter championships. The Tigers field varsity programs in just six of the 11 winter sports that have been completed.

Stanford leads the Directors’ Cup by 84 points over the University of Wisconsin. California, Texas, and North Carolina round out the top-five in the latest winter standings.

Clemson’s men’s track & field team finished 15th indoors after accumulating 18 points at the NCAA Championships in Fayetteville, AR on March 9-10. The team’s effort was highlighted by Travis Padgett’s national title in the 60m dash. His first-place showing was Clemson’s first national crown in track & field since 2000, and the 13th overall under Head Coach Bob Pollock.

The women’s track & field program finished in a tie for 34th at the NCAA Indoor Championships. Senior Della Clark led the way with an impressive third-place finish in the weight throw, earning her first-ever All-America honor.

Todd Bramble’s women’s soccer team earned 73 points, the most so far this season, for Clemson. The team advanced to the Final Eight at the NCAA Tournament and finished with top-15 rankings in both the coaches’ poll and SoccerBuzz.com poll.

Men’s soccer earned 64 points after advancing to the Final 16 of the NCAA Tournament. Clemson finished the season with a 13-5-2 overall record and was ranked in both polls at the conclusion of the soccer season.

The football team finished with an 8-5 record and was ranked as high as #10 in the nation last fall. The Tigers advanced to the Music City Bowl in Nashville, TN, Clemson’s seventh bowl game in eight years under Head Coach Tommy Bowden.