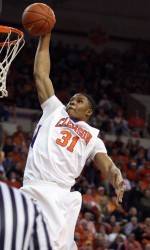 Wake Forest holds a 97-52 lead in the series over Clemson, including a 52-12 lead in games played in Winston-Salem. The two teams have split 70 games at Clemson. Clemson has just three wins over Wake Forest in the last 19 meetings and all three wins have come in overtime.