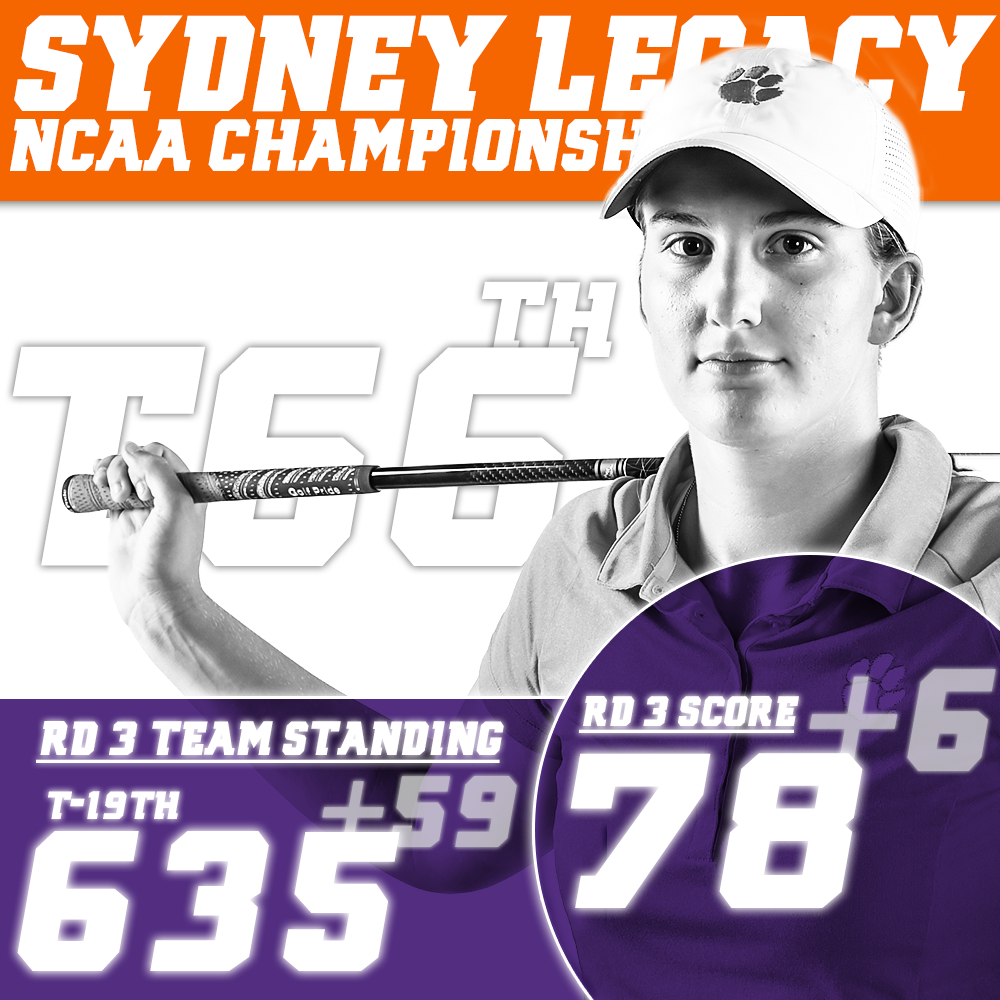 Clemson, S.C.—Clemson improved by seven shots in the second round, but dropped two spots in the standings after 36 holes of the NCAA National Championship Tournament at Rich Harvest Farms in Sugar Grove, Illinois.   Clemson is tied for 19th with fifth ranked Florida State with a 635 total entering the final round of stroke play on Monday.

After the third round on Monday, the field will be cut to the top eight teams and those teams will enter the match play tournament that will determine the National Champion.   Clemson is 16 shots off the eighth team cutline entering the final round.

Clemson is tied for 19th after 36 holes, but is tied with fifth-ranked Florida State and is six shots ahead of second ranked Alabama. The Tigers are just one shot behind eighth ranked Duke.

Northwestern has the team lead with a 599 total, 23 over par. The Wildcats, whose campus is just 45 miles from the Rich Harvest Course, has an eight shot lead over Kent State and a 10 shot advantage over No. 1 ranked Stanford.

Once again the course played difficult for the field of 24 teams and 132 players. The average score was 77.7, three shots better than the opening round average of 80.8 when the student-athletes had to play in rain and high winds. Sunday there was no rain, but the average wind was 15 miles per hour.

Alice Hewson, Sydney Legacy and Marisa Messana all had rounds of 78 to lead Clemson on Sunday to a team score of 26 over par 314.  Legacy had four birdies on Sunday, the most birdies by a Tiger in the tournament so far.

Messana improved by 14 strokes over her first round, the biggest improvement from one round to another in the same tournament in Clemson history. The junior from Fort Lauderdale played the last three holes at two under par.

Ana Paula Valdes shot a second round 80, but is Clemson’s top player for the first 36 holes with a 157 total. She is in a tie for 52nd place. Valdes has 24 pars through two rounds, tied for fifth in the field. Kennedy Swann had a second round 87 and her score did not count towards the Clemson team score.

Clemson will begin play on Monday at 7:45 a.m. Eastern time and will play with fifth ranked Florida State and second ranked Alabama.