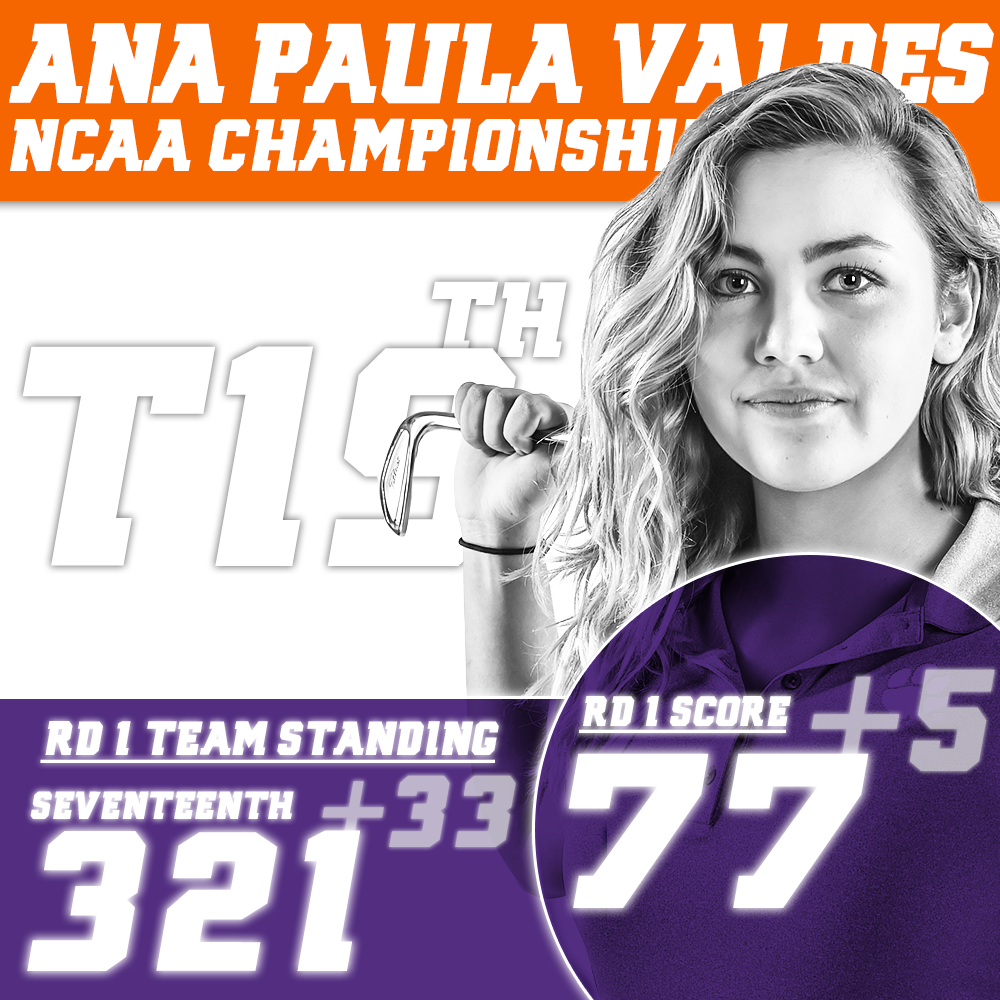 Clemson 17th after First Round of NCAA Championships

Clemson, S.C.—Clemson freshman Ana Paula Valdes shot a 77 that must have felt like a 67 due to the challenging weather conditions during the first round of the NCAA Women’s Golf Championships at Rich Harvest Farms Golf Club in Sugar Grove, Ill. Clemson had a team score of 33-over-par 321, 17th best in the field of 24 teams.

Clemson is just two shots off the 15-team cutline that will be in effect after the third round on Sunday.   California is the No. 15 team after the first round with a 319 total.

Ohio State, Arizona State, Stanford and Baylor are all tied for third at 311.   Five of the top 10 teams after the first day are from the Midwest and none of the team were ranked in the top 10 in the nation entering the tournament.

Clemson and the other 11 teams in the morning wave played in temperatures in the mid 40s, but the wind chill factor was 34 degrees when Clemson started. The weather did not improve much over the course of the day, which was good for the Tigers.

“I would say this is one of the top three most challenging conditions I have seen,” said Clemson Head Coach Kelley Hester, who has now taken four different Division I programs to the NCAA National Tournament. “It was raining by the time we were on the second hold and the winds were gusting to 20-25 miles per hour.

“On top of that, this is the most difficult course I have seen for an NCAA Championship. It is like playing in the US Open or the British Open.

“I was very proud of our ladies today because they had a great attitude all day. I told them before we started to just commit to your shots and do your best. That is all you could do. I told them to keep their head up.

Par was definitely a good score on any hole on Friday. Clemson’s five golfers had just one total birdie, yet the Tigers are ahead of four of the top 10 teams in the nation.

Valdes had 13 pars and five bogeys for her first 18 holes. All five of her bogeys were on par four holes, so the rookie from Mexico was one of the few players in the field to play the par three and par five holes at even par.

Valdes’ score of 77 was tied for the seventh best among the 66 players who participated in the morning wave and she stood in a tie for 19th by the end of the day.   When she finished her round in the early afternoon, she was in 66th place.   She was the only Clemson golfer who did not make a double bogey on Friday.

The difficulty of the conditions was shown by Alice Hewson’s round. The sophomore had shot 75 or better in 32 of 33 rounds this year and had never shot over 76, but she finished with a nine over par 81 on Friday. After turning with a 42 on the front nine, Hewson played the next seven holes at just one over par before she made a double bogey on the 17th hole.