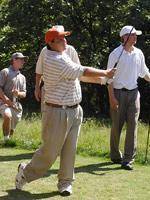 Clemson, SC – Jack Ferguson shot a 147 for 36 holes on Saturday, leading Clemson to an 11th place standing after two rounds of the Chris Schenkel E-Z-Go Invitational in Statesboro, GA. The 15-team tournament that features nine of the top 20 teams in the nation is being played at the 6962-yard par 72 Forest Heights Golf Course.

All 15 teams played 36 holes on Saturday. The event will conclude on Sunday with 18 holes. Clemson stands in 11th place with a 599 total, tied with Southern Cal. Clemson is just four shots behind North Carolina and five behind Florida and Georgia, two top 10 ranked teams. Tennessee leads the field with a 578 team score for 36 holes, a one-shot lead over Auburn.

Ferguson had a rough start to the day, as he was five-over-par for his first three holes. He tripled bogeyed the 10th hole, his third hole of the day. But, the senior came back with birdies on 14,15 and 16, the only Tiger to birdie three consecutive holes on the day. He played even-par golf over his last 11 holes. In round two, Ferguson was two over on the back nine, his first nine holes of the round, then shot a one-under par 35 on the front side, the only under-par nine by a Clemson golfer on Saturday. He stands in 20th place in the individual race. Only seven players in the 75-player field broke par for the first two rounds.

Brian Duncan and Brent Delahoussaye both shot 149 for their 36 holes of work on Saturday and are tied for 27th individually. Duncan had rounds of 74 and 75. He had four birdies and two bogeys on the first round. He had a double bogey on the eighth hole in his second round, his next to the last hole of the day.

Delahoussaye had a 73 in the opening round, tied for the best round of the day by a Clemson golfer He played the last 11 holes in three-under-par. He started five-over-par on the first six holes in the second round before playing the last 12 holes in one under.

Martin Catalioto had a pair of 77s on Saturday. The junior had six bogeys and a birdie in the first round. He had a 37 on the front nine in the second round, but finished bogey-bogey to shoot 77.

Zack Siefert, a red-shirt freshman from Simpsonville, SC, made his varsity debut for the Tigers. He had a tough start with a double bogey on his third hole and he was five over for his first six holes before finishing with an 80. He improved by two shots in the second round when he made his first two birdies as a Tiger.