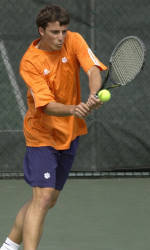 CLEMSON, SC – Former men’s Clemson tennis player Clement Reix competed in the qualifying tournament for the US Open this past Wednesday in Flushing Meadows, NY.

Clement Reix is currently ranked 251 in the ATP world rankings and due to his rank was able to participate in US Open qualifying. This was the second time Reix has competed in a grand slam qualifying tournament (Australian Open in early 2011).

Reix has had a very solid season and his ranking has greatly improved from 685 as it was exactly one year ago. His ranking (251) is now in a position where he can regularly enter grand slam qualifying events, increasing the chances of making his first grand slam main draw in the near future.