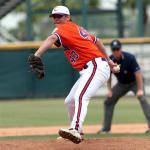 Graduate Clemson pitcher Sean Clark was not on the top of the list of candidates to make first-team All-ACC Tournament when the league baseball event began on May 24. The right hander from Los Angeles, CA, had pitched in just seven games and for 10 1/3 innings all season and had not had a decision prior to the tournament.

He had red-shirted the 2005 season due to injury, so that was it for his career numbers. And, he had never pitched a game on the road in his career. In fact, the only reason he made the trip to Jacksonville, FL for the ACC Tournament was the injury to outfielder Travis Storrer. That freed up a roster sport and Clark got on the bus.

Clark did not pitch in the first four games of the ACC tournament and had appeared in just two games in the last two months, one-inning appearances against Wofford and Wake Forest, respectively. But, Clark was handed the ball as the starter for the ACC Championship game on May 28, an assignment he learned of when he got on the bus to come to the ballpark on Sunday morning.

Clark responded with a memorable performance in the nationally televised (Fox Sports Net) game against NC State. He went eight innings, allowed just four hits, struck out five and walked just one against a Wolfpack team that had hit .337 during the regular season to lead the ACC in hitting.

Clark had a three-hit shutout through eight innings, then allowed a hit to the leadoff batter in the ninth. That brought out Jack Leggett, who came to mound and hugged Clark before he took him out, perhaps an unprecedented show of appreciation by the 13-year Clemson mentor.

Clemson held on for the 8-4 victory over the Pack and the ACC Championship, the first for the Clemson program since 1994. Clark had never pitched more than three innings in his college career prior to Sunday’s game. In fact, he had just the 10 1/3 innings of experience prior to Sunday’s eight innings. For his performance on Sunday, Clark was named to the ACC All-Tournament team, one of six Tigers honored.

Clark’s performance makes one wonder, “What is the most unlikely clutch performance in Clemson history?” From a baseball standpoint the first one that comes to mind also took place in an ACC Tournament championship game. In 1993 Tiger second baseman Jeff Morris hit a grand slam home run in the top of the eighth inning to give Clemson an 11-7 lead, the eventual final score in yet another ACC Championship game against NC State.

Morris had been a starter, but in 524 career at bats he hit just two career home runs. Both were grand slams and both were against the same NC State pitcher, David Allen.

As far as other sports are concerned, another clutch performance by an unknown unknown Clemson athlete took place in the same year as Morris’s grand slam. Thump Delk, a senior on Larry Penley’s golf team played in just five of 13 tournaments prior to the national event and was fifth on the team in stroke average. But, he finished third at the NCAA National Tournament at Lexington, KY that year, leading the Tigers to a fourth-place national finish. Among the golfers he defeated that week were current PGA Tour high profile players Justin Leonard, Tim “Lumpy” Herron, and Stuart Cink.

On the gridiron, one example was Charlie Bauman’s interception against Ohio State in the 1978 Gator Bowl. We all know Bauman now, but at the time of the interception, he was just a second team sophomore middle guard who played about 15 snaps a game. That interception was the only theft of his Clemson career.