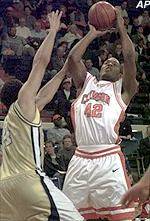 Clemson, S.C. – Starting Clemson forward Chucky Gilmore sustained a torn ACL or his right knee during a workout on Monday and will be lost for the season, Head Coach Larry Shyatt said on Wednesday. Examination by Clemson physicians revealed that Gilmore must have surgery to repair the injury.

It is the second injury sustained by Gilmore since the end of last season. He sprained his medial collateral ligament on his left knee in May while playing in a pickup game in his hometown of Fayetteville, NC.

Gilmore, a 6-8 forward, started 23 games and played in 27 of Clemson’s 30 contests a year ago. He averaged 3.7 points and 6.1 rebounds per game last year. The rebound average was second best on the Clemson team.

“First of all we are most concerned for Chucky’s health and well being,” said Shyatt. “We are confident he will make a full recovery and come back stronger than ever. We plan to make sure he uses this time to his benefit in all aspects, as a basketball player and in the classroom.

“It is certainly a loss to our team, especially in terms of rebounding. He was second on our team last year. But, we have some strong inside players who will make up for his loss.”