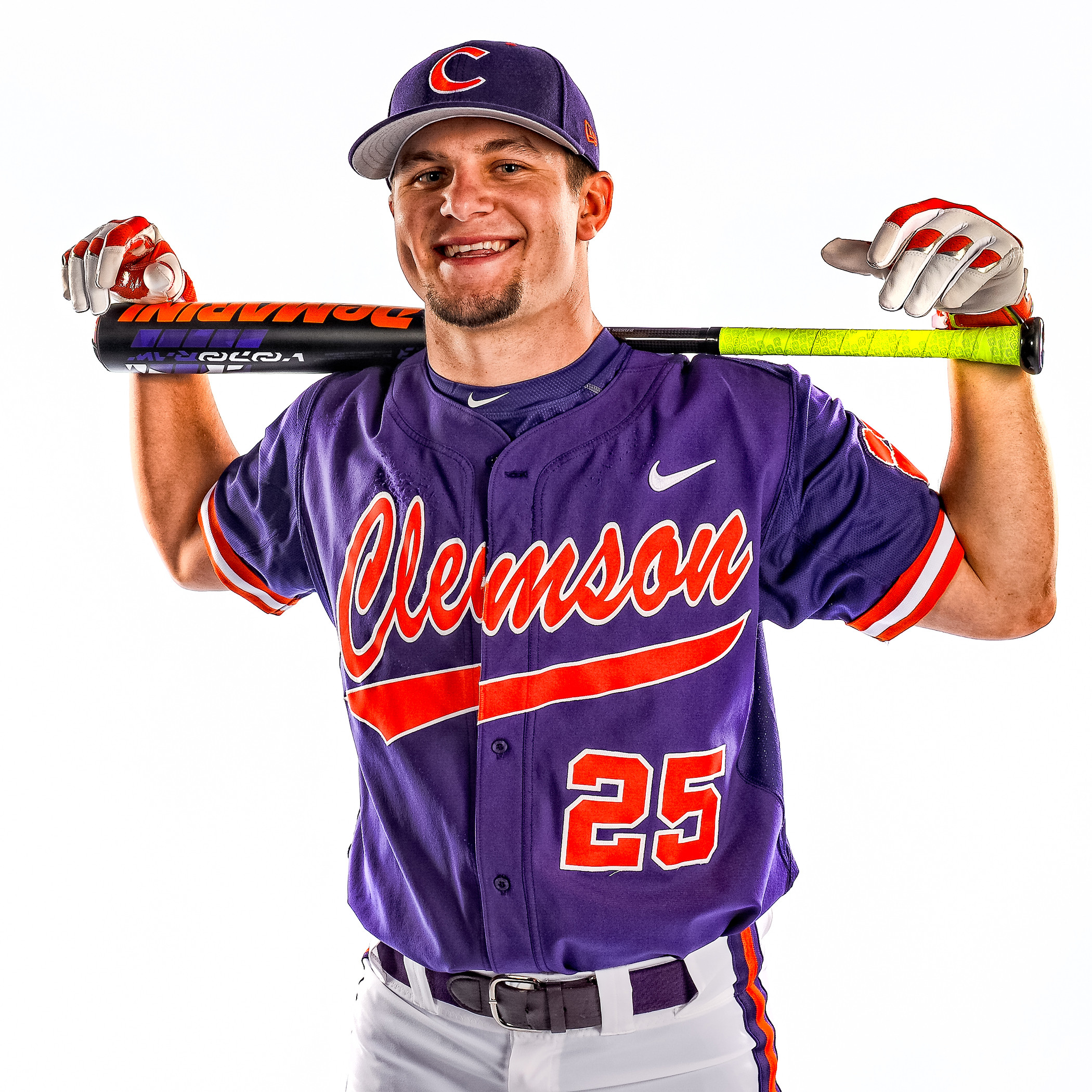 When you walk into Doug Kingsmore Stadium and hear laughter coming from the dugout, you have likely encountered Chris Okey joking with his teammates. The junior has made a name for himself on the team, not only as a great catcher and hitter, but also as the team comedian.

“If I could pick one superlative for myself, it would probably be ‘Most Outgoing/Least Serious.’ I am a bit of a jokester, so that is one thing I could see myself winning.”

But long before he was making his fellow Tigers laugh, Okey was a kid with a dream to don the orange and purple.

“Growing up as a Clemson Tiger living in Florida, I always had the drive to come here,” he said. “I’ve always been a huge fan, and when they decided to offer me, I couldn’t pass it up.”

Only three years into his time at Clemson, Okey is confident with the decision he made to move to South Carolina.

“Coming to Clemson has been the best decision I made in my life. I have had a fantastic time here and look forward to the rest of my time here.”

Okey’s play speaks for itself. He was a first-team All-American, Clemson’s first at the catcher position since 1997, as a sophomore after hitting .315 with 12 home runs and 57 RBIs in 2015.

Prior to the 2016 season, Okey was named a preseason first-team All-American and the No. 1 defensive catcher in the nation by Baseball America. But that has not stopped him from giving his best in practice every day.

“It felt good to be recognized, but at the same time, it was a preseason poll, which meant I hadn’t really done anything yet. There are a lot of good catchers in the country, so I still have a lot to prove.”

With new head coach Monte Lee at the helm, Okey has been able to step his game up even more than in previous seasons.

“It’s been different,” said #25. “I told the guys before this season that being an upperclassmen this year doesn’t count for anything, because we don’t know the coaches. The coaches have been doing an incredible job of not only getting to know us, but also teaching us something new every single day. Coach Lee works his tail off and makes sure we are as prepared as we can be for every game of the season.”

Even with new coaches, Okey hasn’t done anything drastic to change up his practice routine.

“I am doing the same routine I have always done and working on what I need to improve after every performance. Coach Lee has been working us really hard and doing a great job.”

One trait that Okey said helps his tremendously on gamedays is his Type A personality.

“Being Type A keeps me loose in situations and allows me to have fun. A lot of times playing this game, you’ll be stuck in stressful situations. But when you have a loose personality, you can still have fun and live in the moment.”

Type A personalities can often get bored easily, and with baseball being known as a slower game, one may wonder how Okey makes it work.

“There’s a certain point in the game where you have to slow it down and concentrate,” he said. “You have to know that it can be a slow-paced game sometimes, but that is part of the process.

“My personality benefits me because I can always slow myself down instead of having to speed myself up. That’s a good position to be in.”

Okey fell in love with the game of baseball at a young age and has been playing ever since.

“I was four years old and my brothers began playing baseball, so I picked it up too. I would hit with them in the backyard, and I’ve been playing every day since then. It is the sport I chose and I am so happy with it. It is the most fun game on Earth to me. I think it is one-of-a-kind.”

Okey played in summer leagues as a kid, and once he got to college, he wanted to continue that tradition. For the past two summers, Okey has been playing for the USA Collegiate National Team.

“The first summer I was with Team USA, I was playing with guys who were No. 1 or No. 2 in the draft. It was pretty cool to learn from them and play with that caliber of player. They taught me a lot without even knowing it.”

Part of the USA Baseball experience is its unique international travel schedule, which Okey enjoyed taking full advantage of.

“Traveling to different countries with the team was amazing,” he noted. “We got as far as The Netherlands and went to Cuba, which is pretty crazy. It’s always fun traveling the world with those guys, seeing new things and creating lifelong friendships. It was an honor to play with them.”

His favorite trip came with many ups, but one down in particular.

“The Netherlands was so fun and was my favorite trip. The only bad thing about The Netherlands was that they had no ice. You’d be playing in the middle of a game, running around the bases, thirsty for a drink of water and you’d go in there and the water was warm.”

After a summer of fun, Okey was named “Mr. Popular” by his USA Baseball teammates.

“I have no idea how I won Mr. Popular,” he admitted. “I didn’t know whether to thank them for that award or not. I was the one they picked on the most, so they must have assumed I was the most popular one.”

On his Clemson team, Okey said a couple of his teammates could win superlatives of their own.

“Reed Rohlman definitely gives me a run for my money when it comes to ‘Most Outgoing.’ He always loves talking to other people and he’s very social…a real one-of-a-kind guy. Weston Wilson would probably win ‘Best Humor.’ Robert Jolly would win ‘Best Humor’ as well. They are both really funny guys and have great personalities.”

To get to know each of his teammates, Okey credits the new player facility for further developing the team’s chemistry this season.

“With the new facility opening, it is awesome…we are always in there. We stay there until 11:00 at night doing homework, playing ping-pong and just hanging out. We are getting to know each other really well, along with the coaches, because their offices are in this facility.”

Getting to know his teammates and building bonds with them has allowed Okey to build on skills for when the day comes to hang up his cleats.

“I want to be a coach whenever the time comes to stop playing. I want to be in the game of baseball and help others, while passing along some of the things I have learned.”

As a coach, Okey wants to be able to impact players the way he has been impacted his entire life.

“I think that the most important thing a coach can have is impact. The teaching will come because you already know the game, but I think gaining that trust and building a relationship over the years is key. Once you gain that trust, it’s lifelong.”

Thanks to his coaches, Okey and his teammates have been having the time of their lives early this season, and look forward to what the future holds.

“We are very confident in what we do because we have been working all fall and all spring to perfect our craft. We have been working really hard and feel very prepared. I think fans see a team that is out there having fun, playing the game the right way, respecting the game and one that is exciting to watch.”