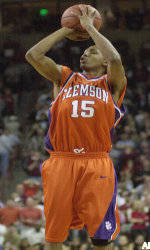 COLUMBIA, S.C. – Clemson’s Cheyenne Moore hit a 3-pointer with 3.4 seconds to go in overtime as the Tigers beat South Carolina 63-62 on Saturday night.

Moore took the pass on the left wing right in front of Clemson’s bench and buried the 22-footer to break a four-game losing streak in the in-state rivalry.

The inbounds pass for South Carolina rolled out-of-bounds into the Tiger bench, triggering a huge celebration.

Clemson coach Oliver Purnell said this one was big for his team, which has made impressive strides after finishing last season at 10-18. And it showed as his Tigers overcame adversity twice to beat a South Carolina team that made the NCAA tournament last season.

The Gamecocks led for most of the second half. But the Tigers went on a 14-4 run and took a 51-49 lead on Robinson’s free throws with 19.4 seconds left.

After a time-out, Kelley go the ball on the right wing and drove, hitting an off-balance 7-footer to tie it. Hammonds shot at the buzzer was short, sending the rivalry game into overtime for the first time since Clemson won 89-84 in 1993.

South Carolina took four-point leads twice in overtime. The first time, Robinson stopped the run with a 3-pointer. The second time, Robinson drew a foul, hitting his first free throw and missing the second. But the ball got kicked out to Hammonds who hit a 3-pointer with 1:18 left in overtime.

Clemson only shot 3s in the extra period, hitting three of four.

Both coaches promised a defensive showdown, and their teams delivered.

The Tigers had 23 turnovers and the Gamecocks gave the ball away 17 times.

But Purnell will take an ugly win. He jumped up in the air as South Carolina turned the ball over last time, and gave athletic director Terry Don Phillips a big hug a few minutes after the buzzer.