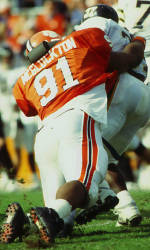 Chester McGlockton, Gene Moore to be Inducted Into SC Athletic Hall of Fame

Mathis and Moore will be enshrined posthumously.

The seven individuals will be inducted to the state’s highest athletic honor on May 23 at the Columbia Metropolitan Convention Center. Tickets (table of eight for $500) and program sponsorships may be purchased by calling the SCAHOF office at 803/779-0905. The affair, which includes a reception, dinner and a silent auction of sports memorabilia, begins at 5:30 p.m.

In addition to the inductees donning of the symbolic blue jackets, the Bobby Richardson Sportsmanship Award recipient and the professional and amateur athletes of the year will also be honored. The event, which includes a host of returning past inductees, is the largest annual celebration of Palmetto State sports stars under one roof. Legendary South Carolina State coach and 2008 SCAHOF President Willie Jeffries, known for his wit and witticism, will again preside over the banquet as master of ceremonies along with Executive Director Ephraim Ulmer and this year’s president, Julian Gibbons.

Chester McGlockton: A prominent defensive tackle on Clemson’s top-ranked defense in 1990 when they allowed only 216.9 yards per game and held opponents’ rushing to a miniscule average of 53.4 yards per contest in 1991, Chester McGlockton, who played for the Tigers from 1989-91, was a first-round draft pick of the Oakland Raiders. He spent 12 years in the NFL, and stood out on the defensive line for the Raiders (1992-97), Kansas City Chiefs (1998-00) and Denver Broncos (2001-02). He earned all-pro status three times (1994-96) and participated in the Pro Bowl four times (1994-97). The 1991 All-Atlantic Coast Conference pick recorded 10 tackles for loss in 1989 and also recorded seven sacks. McGlockton remains eighth on the Clemson career list for most sacks (20.5) and is third all-time with eight caused fumbles.

Gene Moore: Coach Gene Moore, the team captain of the 1949 Clemson football team, “the greatest center I ever coached.” The Tigers’ football-baseball standout of the late 1940s, snapped the ball for the winning field goal in the 1949 Gator Bowl that gave the Tigers a 24-23 victory over Missouri. He anchored the line in the single-wing offense that spearheaded an undefeated season in 1948 and a No. 11 ranking by the Associated Press. Moore earned honorable mention All-America honors in 1949 as well as playing in the Blue-Gray and All-Star Senior Bowl post-season games. In baseball, Moore helped the Tigers to their first NCAA tournament, a club that was knocked out of the playoffs by a George Bush-led Yale team. Moore, who was inducted into the Clemson Hall of Fame in 1993, led Clemson in triples in 1948 and 1949, and in total bases in 1948. He was drafted by the Philadelphia Phillies in baseball and the New York Giants in football, and opted for baseball. After a stint in the U.S. Army, Moore returned to play for the Boston Red Sox minor league system before becoming a teacher-education administrator and coach in his native Lake City area. Clemson recognized his leadership and educational commitments in 2002 by dedicating its education building, the Eugene T. Moore School of Education. A dedicated agriculturist, Moore worked tirelessly to save the historic Lake City Municipal Produce Market Building and founded the National Bean Market Museum within the historic building. Moore, who passed away in 2008, left a well-known legacy in his daughter, businesswoman-philanthropist Darla Moore.

Brad Edwards: A native of Lumberton, NC, Brad Edwards starred as a free safety for the University of South Carolina. Selected in the second round of the 1988 NFL Draft, he started for the Washington Redskins in Super Bowl XXVI against the Buffalo Bills and had two interceptions while finishing as runner-up for MVP honors. After his nine-year playing career where he also played for the Atlanta Falcons and Minnesota Vikings while recording 18 interceptions and two touchdowns, Edwards served his alma mater as an assistant athletics director and later senior associate athletics director (1999-06). Following his tenure at USC, Edwards entered the private sector at IMI Resort Holdings, Inc., where he was responsible for the recruiting, hiring, and training of sales executives and sales directors for IMI’s international resort properties. Edwards returned to athletics on May 17, 2009, when he was named the director of athletics at Newberry College, and on October 1, 2010, he was promoted to Executive Vice President of Intercollegiate Athletics and Institutional Advancement at Newberry.

Finis Horne: Finis Horne is credited with starting Lander University’s athletic program in 1968 with men’s basketball and developed it into 11 sports by his retirement in 1997. During his 29-year career as basketball coach and AD, he compiled a 491-379 record, and won NAIA District 6 titles in 1978, 1979 and 1980. The five-time District 6 coach of the year retired as the state’s winningest active coach. As the long-time chairman of District 6, Horne successfully moved the league’s tournament from on-campus sites to a revenue-producing one-site event in the early 1980s, and as AD, he oversaw Lander’s transition from NAIA to NCAA Division II. Under his guidance, Lander captured back-to-back Peach Belt Tournament Championships in 1994-95 and advanced to the NCAA tournament. The Lander Hall of Famer received the Order of the Palmetto, South Carolina’s highest citizen award in 1997, and the university named its new basketball home “Finis Horne Arena.”

Joe Mathis: Joe Mathis guided Greenville’s Sterling High School to the Negro League’s Class AAA football championships in 1947, 1950, 1953 and 1956, achieving a career record of 107-26-17. He also coached Sterling High to a state title in baseball in 1960. During his career he also coached both boys and girls basketball and track. As an student-athlete, Mathis played football for Sterling High from 1938-1941, and then played at Benedict College in 1942. He moved to Allen University where he starred as quarterback and team captain from 1943-1945. After he retired from Sterling High, Coach Mathis wrote a book on how the black and white communities could improve relations in the upstate of South Carolina. He died in 2002.

Ed Pitts: Ed Pitts played tackle for the University of South Carolina Gamecocks (1957-59) and earned All-ACC honors in 1959 while attaining a spot on the Paul Williamson All-American team that season. A team co-captain in 1959, Pitts was selected to the All-Atlantic Coast Conference first team in 1958 and ’59. Named co-captain of the South Team in the North/South Shrine Game in Miami his senior year, Pitts was drafted by the San Francisco 49ers but injury prevented him from playing. He later served as the USC head freshman football coach (1962-66) before spending the next 19 years as the director of the Gamecock Club, where he brought that organization to heights never seen before. Pitts was enshrined in the University of South Carolina Athletic Hall of Fame in 2002.

Arnold Tucker: A native of Calhoun Falls, Arnold Tucker was a member of three National Championship teams (1944-46), and was undefeated at Army, leading his fellow cadets to an unparalleled 27-0-1 record during his prolific career. He was one-fourth of the 1946 Army backfield, coached by West Point legend Earl “Red” Blaik and considered by many as the greatest of all time – Tucker, Tom McWilliams and Heisman Trophy winners Doc Blanchard and Glenn Davis. The 1946 All-American led Army to three Lambert Trophies, passing for 1,127 yards and 10 touchdowns in his three-year campaign while trouncing perennial powerhouses Michigan, Oklahoma and Notre Dame. After graduation from the USMA and flying training, Tucker returned to West Point as an assistant backfield coach. He later served in numerous capacities for both the Army and Air Force, including Deputy Chief of Operations for the 5th AF in Japan from 1968-1970 and Commanding Officer of the 16th Special Operations Squadron in Thailand in 1970. From 1971-74, Tucker acted as Commanding Officer of the Army ROTC program at the University of Miami. He was recently enshrined in College Football Hall of Fame