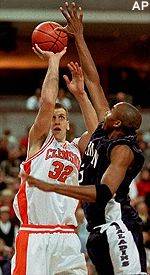 Javtokas averaged 3.8 points and 3.6 rebounds per game in the 16 contests he played. He started four of the 17 games for the Tigers and averaged 13.4 points per game. His best game was against South Carolina State when he scored 10 points on 4-5 shooting in 19 minutes and pulled in six rebounds. He had a season high seven rebounds in the win over Furman.

Shyatt also said that power forward Ray Henderson would not make the trip to Maryland this weekend in order to work on rehabilitation for his injured groin muscle. Guard Edward Scott is also doubtful with a cartilage injury in his chest and freshman Tomas Nagys is questionable with tendinitis in an ankle.

Clemson should start the same lineup it has used the last two games. Adam Allenspach will be at center, Will Solomon and Pasha Bains at the guards, Andrius Jurkunas and Chucky Gilmore at the forwards.