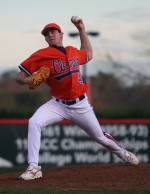 Adrian Casanova hit a two-out, run-scoring double in the eighth inning to lift #5 Clemson to a 7-6 victory at #10 Georgia Tech in game one of a three-game series in front of 2,642 fans at Russ Chandler Stadium on Friday. Casanova also hit a two-out, two-run double in the second inning, as he had a team-high three RBIs in the game. The Tigers jumped out to a 6-0 lead before the Yellow Jackets tied the score with six runs in the sixth inning.

Freshman Daniel Moskos allowed just one hit and no runs with two strikeouts to pick up his sixth save of the season. Despite pitching 4.1 stellar innings in relief of starter Blake Wood, Ryan Turner (3-2) suffered the loss, as he allowed one run on only two hits.

Clemson, who totaled 10 hits, was led by Andy D’Alessio, Travis Storrer, and Casanova, who all had two hits apiece. Storrer and Casanova also had two doubles each, as the team had five in all. Luke Murton had a game-high three hits, as Georgia Tech had nine hits in the game.

D’Alessio gave the Tigers the lead in the second inning when he hit an opposite-field, solo home run to left field, his 12th of the season. It also extended his hitting streak to 13 games. Two batters later, Storrer lined a two-out double to right field. Stan Widmann then drew a walk after fouling off several two-strike pitches, and Casanova followed with a two-run double to center to score Storrer and Widmann. Herman Demmink plated Casanova on a bouncing single up the middle, giving Clemson a 4-0 lead.

The Tigers added to their lead in the third inning with two more runs to take a 6-0 lead. D’Alessio hit a one-out single through the right side and went to second on Marquez Smith’s line-drive single to left. Storrer then hit another double, this time over the first-base bag, that scored D’Alessio and Smith, as the latter was just safe ahead of the relay throw.

Danny Payne got the Yellow Jackets on the board when he led off the sixth inning with a solo home run to right-center, his eighth of the season. It was the first long ball allowed by Josh Cribb in 2006. He had also retired 11 straight batters before Payne’s homer. Two batters later, Matt Wieters walked and Jeff Kindel followed with a bunt single. Wes Hodges loaded the bases with an infield single. Then on a 1-2 pitch to Whit Robbins, the junior deposited a breaking pitch up in the strikezone over the wall in right field for a grand slam, his seventh long ball of the season. Murton followed with another infield single in a perfect spot and advanced to second on Mike Trapani’s groundout. Michael Fisher tied the score with a two-out single through the right side, plating Murton.

After stranding Chalk at second after he led off the seventh inning with a double, the Tigers came through with a clutch two-out hit in the eighth inning to give Clemson back the lead. Storrer walked with one out and advanced to second on a wild pitch. Widmann flew out to deep left-center for out #2. But Casanova lined the game-winner up the middle past a diving Trapani, scoring Storrer. Casanova made it all the way to second on the “hustle” double.

Moskos allowed just one baserunner in the final two innings to close out the win.

Clemson and Georgia Tech will play game two of the series on Saturday at 1:00 PM. The game will be televised live by FSN South.