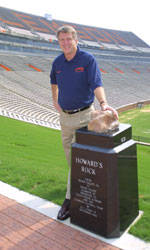 Clemson University Athletic Director Dr. Terry Don Phillips announced today that his department, in conjunction with Carr Sports Associates of Gainesville, FL, has completed Clemson University’s Strategic Plan for Athletics. The 150-page document will serve as an essential component in the department’s management practices and policies in the foreseeable future.

The document will aid the athletic department in its mission to align itself with the University’s vision of becoming a Top 20 Public University by the year 2010, as well as provide opportunity to work towards becoming a model athletic program.

“This document will be our roadmap as we make important decision concerning the future of the athletic program as we pursue our goals,” said Phillips, who began his second year as Clemson Athletic Director on July 1. “We hope this planning process will help our department meet the challenges of an extremely fluid environment in intercollegiate athletics. The recent events concerning conference expansion are prime examples of our changing landscape.

“We will strive to build a model Division I athletic program and this Strategic Plan gives us a foundation for that vision. It provides us with important benchmarks, guideposts we plan to implement between now and 2010.”

The model is based on five Core values, four of which mirror the four operating principles of the NCAA Certification: Rules compliance and institutional control; academic integrity; fiscal integrity; and equity, student-athlete welfare and sportsmanship. The fifth core value, competitive excellence, is directly linked to the department’s competitive expectations as well as its desire to achieve the University’s 2010 Goals for Athletics.

Carr Sports Associates made four trips to Clemson between September of 2002 and March of 2003. During those visits its representatives met with Clemson coaches, student-athletes, athletic administrators and University administrators, including Clemson President Jim Barker. Carr Sports Associates conducted interviews, toured facilities, and conducted workshops with the various constituency groups listed above. Twenty-eight individuals were appointed to the Strategic Planning Leadership Team to provide guidance and implementation of the project.

The Strategic Planning Leadership Team, through guidance from Carr Sports Associates determined critical issues that will significantly influence the athletic department’s direction in developing its goals for the future. The team examined the landscape from an institutional and athletic department standpoint in areas that included academics, facilities, and on-field of competition success and provided data from comparable athletic programs that will provide benchmarks for future decisions.

The report outlined 14 goals for the department in its overall goal of achieving the Athletic Department’s and the University’s 2010 Goals for Athletics, but six were given highest priority. Those six were prioritized as a group, but not ranked in order. Those goals are as follows:

The department has already made strides towards achieving these goals. Tangible facilities improvements have been completed within the last year in regards to Clemson’s basketball facility, baseball stadium, indoor track and swimming facilities.

Plans have also been developed for improvements at Clemson Memorial Stadium where a new WestZone Club will provide a revenue stream to help finance these improvements. This project directly or indirectly incorporates all six of the above listed goals.

Gene Corrigan, former ACC Commissioner, Gerald O’Dell and Bill Carr, both former athletic administrators, comprised the team from Carr Sports Associates. The company’s consulting team worked 712 hours on the project over a time period of one year. The hours included the four visits to the Clemson campus, meetings with various groups, and the writing and editing of the Strategic Plan. The fee for the project was $60,000.