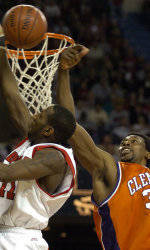 LOUISVILLE, Ky. (AP) – Brian Johnson scored a career-high 13 points and grabbed 13 rebounds to lead Louisville to a 74-68 win over Clemson in the second round of the National Invitation Tournament on Monday night.

Taquan Dean scored 20 points for the Cardinals (20-12), who will host Missouri State or Houston in the tournament quarterfinals on Wednesday.

Akin Akingbala led Clemson (19-13) with 19 points and Cliff Hammonds added 16, but the Tigers shot just 39 percent from the floor and just 11-of-24 from the free-throw line.

Louisville never trailed after taking the lead midway through the first half, but the Tigers kept it close throughout only to be undone by their woes at the line. During one stretch early in the second half, the Tigers missed seven straight free throws, preventing them from getting any closer than four points the rest of the way.

The Tigers flustered Louisville early, pushing the Cardinals away from the basket and forcing them into bad shots and sloppy turnovers.

At one point in the first half after seeing one of his players bumped to the ground, Louisville coach Rick Pitino stomped the floor in disgust and yelled at the referees, “It’s not football.”

But Clemson had its own troubles at the offensive end. Despite dominating the glass and getting several easy looks, the Tigers couldn’t put any distance between themselves and the Cardinals.

Eventually, Louisville gathered itself, led by a rejuvenated Johnson. Three surgeries in a five-month stretch on his right knee during the freshman’s redshirt season left him hobbled and limited his effectiveness.

The surgeries cut Johnson’s practice time, forcing Pitino to play him in short bursts. But against the Tigers, Johnson looked downright spry. He dunked the ball three times, elevating off the floor with the kind of explosion the Cardinals haven’t seen all year.