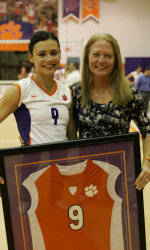 Cansu Ozdemir to Return to Volleyball Team in 2011

Just a few months ago, Clemson volleyball wrapped up its 2010 campaign at 18-13, and it looked as if they’d have a strong core returning, losing just senior libero Cansu Ozdemir. However, Ozdemir, a three-year contributor for the Tigers at various positions, will return to the Tigers as she enrolls in graduate school in the fall.

Ozdemir tested the waters of returning to her home country, Turkey, as a genetic counselor, but decided against it. In Turkey, the job is usually reserved for doctors. She will enroll in the Food, Nutrition, and Culinary Sciences master’s program, which is a two-year degree program.

“I was looking at options for next year, and sent in projects to companies in Turkey, but never heard back on them,” said Ozdemir. “Coach Hoover asked me if I would be willing to stay for another year, and I couldn’t believe it.”

Ozdemir was injured and did not participate in any matches during her freshman season, 2007, when Clemson went 21-1 in league play and claimed the ACC title and advanced to the second round of the NCAA tournament. Due to the NCAA’s rule allowing players five years to play four, Ozdemir is eligible for an additional season, as she technically redshirts her freshman season.

Ozdemir has been praised by Hoover for her desire to be a team player, and do whatever it takes to win, including position changes.

“I am very excited and a feel very lucky that this worked out. I will start on my master’s in the summer.”

As the team’s lone senior in 2010, Ozdemir played libero in every match for Clemson, recording a team-high 527 digs and averaging 4.43 per set. She was also second on the team with 25 service aces. Ozdemir spent her first two seasons playing primarily on the right side, but took over at libero after Clemson lost 2009 ACC Defensive Player of the Year, Didem Ege, to graduation.

To give an idea of the youth on the team, she will actually be the only participating senior on the 2011 team. Brittany Fennell was forced to give up the sport in the fall after several back surgeries, and is the only other senior in 2011.

Ozdemir is excited about the possibility of returning for an advanced degree.

“I would probably not be able to complete a master’s without volleyball, and for that I feel so fortunate. I am looking forward to coming back and doing whatever the team needs me to do to win a championship.”