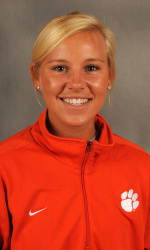 The Solid Orange Squad, an elite student-athlete community service organization at Clemson, has named Callie Cavanaugh as the director for the 2011-12 academic year. The Charlotte, NC native came to Clemson in 2009 to play soccer. Currently, Cavanaugh is majoring in Elementary Education with plans to teach second grade immediately following graduation.

The Director of Community Relations for the Clemson University Athletic Department, Linda White, relies on student-athletes like Cavanaugh to operate the program. Cavanaugh will promote the program, fill requests that come to athletics for all types of service, oversee the five components of the character education program, and serve as the liaison with the university for service initiatives. Fortunately, Cavanaugh has already been involved in the program as a student-athlete.

“The first SOS event that I had the opportunity to help with was at Six Mile Elementary,” Cavanaugh said. “I knew that I wanted to stay involved after I saw the impact that SOS has on the Clemson community and surrounding areas.”

The SOS has distinguished itself in the NCAA because Clemson is the first and only Division I University to incorporate a character education program, but Cavanaugh will have a chance to leave a mark of her own. This highly successful community relations program is only in its sixth year, which means that there is plenty of room to grow. She plans to start by encouraging even more student-athlete participation in service opportunities. During the 2010-11 school year, nearly 72% of student-athletes at Clemson were engaged in service.

“Athletes have a huge impact,” Cavanaugh said. “I think that student-athletes have a great platform while they are at Clemson because children look up to them and pay close attention to everything that they have to say.”

Although the 2011-12 academic year begins in August, Cavanaugh is already at work filling requests to the athletic department for service and transitioning into her new role. Cavanaugh’s first event as the Director of SOS will be on June 15, when student-athletes educate students from Seneca Middle School on the importance of teamwork, integrity, gratitude, education and respect.

“I look forward to our summer events,” Cavanaugh said. “It takes a lot of a student-athlete’s time to fill the service requests, but spending time with these children gives us so much more in return.”