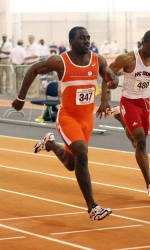 Clemson sophomore C.J. Spiller was named indoor track & field All-American on Sunday by the U.S. Track & Field and Cross Country Coaches’ Association (USTFCCCA). By virtue of his 10th place finish, he did not make the finals of the event on Saturday. However, he was one of the top eight American finishers and thus earned his first-ever indoor All-America certificate.

Spiller posted a time of 6.67 in the prelims Friday evening, but was beaten out by literally thousandths of a second for the final spot in the finals. He was also the ACC runner-up in the 60m dash this season and a scorer in the 200m dash as well.

The men’s track & field team will host the Clemson Relays this weekend for the start of the 2008 outdoor season.