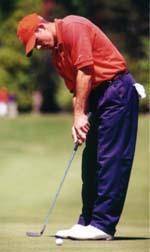 Byrd and Glover to Play in British Open

Clemson, SC – Former Clemson All-Americans Jonathan Byrd and Lucas Glover will both play in the 2007 British Open at Carnoustie Golf Club in Scotland July 19-22. It will mark the first time two golfers with Clemson ties have played in the same British Open.

Byrd qualified for the event on Sunday by winning the John Deere Classic. Byrd shot an 18-under par score of 266, including a five under par 66 in the final round to win by a stroke over Tim Clarke.

It will be Byrd’s first appearance in the British Open and his first Major this year. He has played well in Major’s previously, however. He finished eighth in the 2003 Masters and 15th at the 2003 US Open, the only Clemson golfer to record a top 15 finish in two majors in the same year. He made the cut at last year’s PGA in Medinah, IL and finished 20th.

With the victory, the third of Byrd’s career, he is 37th on the PGA Tour money list with $1,340,080, but is 23rd on the FedEX Cup points list. He has six top 25 finishes in 16 events this year. Byrd is now the only American golfer under 30-years-old who has won three PGA Tour events in his career.

Glover was the first alternate for the event by virtue of his #21 finish on the PGA Tour money list last year. But he entered the tournament on Monday when a player dropped out. Glover finished 11th at the recent John Deere Classic and has now won $1,184,444 for the year. He ranks 45th on the money list. Glover has made 14 cuts and has eight top 25 finishes this year.

Glover will play with Ernie Els and Robert Karlsson in the first two rounds. They start at 7:36 AM on Thursday and 2:25 AM on Friday.

This will be Glover’s second appearance in the British Open. He did not make the cut after rounds of 72-73 at Royal Liverpool last year. The only other golfers with ties to Clemson who have played in the British Open are Chris Patton (1990) and Michael Hoey (2001). Both of those players were entered as amateurs. Patton had won he 1989 US Amateur and Hoey won the 2001 British Amateur. Neither of those golfers made the 36-hole cut.