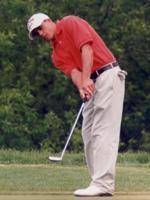 Glover, playing in his second British Open, fired a one-over-par 72 on Friday and stands in a tie for 25th place after two rounds with an aggregate score of 143. He is tied with among others Vijay Singh. Glover had birdies on the sixth and 10th holes and pared the last six holes in making his second cut this year in a Major. For the two rounds, Glover has six birdies, five bogeys and a double bogey. He has birdied the par five sixth hole, known as Hogan’s Alley, each of the first two rounds.

Byrd also had a 72 in the second round after an opening round 73 on the par 71 course that is just over 7200 yards long. Byrd had three birdies on the front side, the first, fifth and ninth holes and turned at one under par 35. He had two bogeys and seven pars on the back nine to finish with a 72.

Byrd stands in 47th place entering Saturday’s third round. This is Byrd’s first appearance in a British Open. He is now the first golfer in Clemson history to make the cut in all four majors in a career. He finished eighth at the 2003 Masters, 15th at the 2003 US Open and 20th at the 2006 PGA Championship.