CLEMSON, S.C. – Head women’s basketball coach Amanda Butler has agreed to a new 5-year contract through the 2023-24 season, Director of Athletics Dan Radakovich announced on Friday. The terms of the contract were approved by the Clemson University Board of Trustees Compensation Committee.

“We are proud of the accomplishments of this season’s women’s basketball team, and certainly Amanda and her staff and student-athletes put together a remarkable campaign,” Radakovich said. “The future of Clemson women’s basketball is bright, and we are excited to have Amanda leading our program.”

In her first year at the helm of the Clemson women’s basketball team, Butler led the Tigers to their best season in more than a decade, including their first NCAA Tournament appearance since 2002 and first 20-win season since 2001. Her first-year success placed her in the national spotlight as she was named one of 10 semifinalists for Naismith Women’s College Coach of the Year.

“I love being a Clemson Tiger,” said Butler. “A big reason why I love being at Clemson is the way that we are supported and the vision that is shared by my staff and our administration. We are really excited to continue this journey together and see how high we can climb. Go Tigers!”

ACC Coach of the Year

Working with a team that posted just five ACC wins over the past four years, Butler coached the Tigers to a 9-7 ACC record, the most conference wins for Clemson since 2002. Following her regular season success, Butler was voted ACC Coach of the Year by her peers and the media, becoming the first Clemson head coach to earn the honor since 1994 (Jim Davis).

Clemson thrived in conference play this season finishing eight spots (seventh) above their predicted finish in the ACC preseason poll (15th). The Tigers tied the ACC record for differential between the preseason poll and postseason finish. All three of Clemson’s wins over top 25 opponents came in ACC action.

Butler recently added a trio of transfers to the Tigers, rounding out a 2019-20 roster that will feature eight new faces. 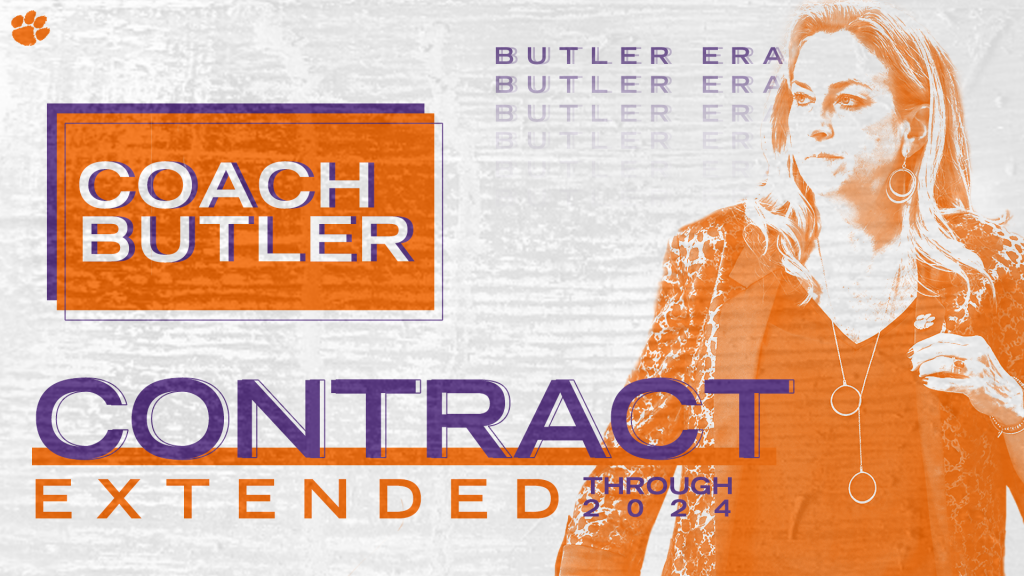