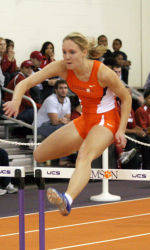 Clemson, SC – Linda Buchholz moved into third place on Clemson’s all-time performance list in the heptathlon with a total of 5,206 points, a total she accumulated Monday and Tuesday at the Tiger Multi-Event Open. She finished second in her first-ever collegiate heptathlon. Her total is also good enough for an NCAA provisional qualifying effort.

Buchholz began the second day of competition with a good mark in the long jump. She hit a mark of 18’9.25″. The school record-holder in the javelin upped her point total vastly with a good mark on Tuesday in that event. She threw the javelin 137’8″ and held a lead in the heptathlon going into the final event. In the 800m, she ran a time of 2:36.30 to complete the competition.