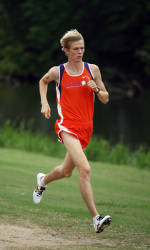 Clemson, SC – Sam Bryfczynski of Clemson was named to the ESPN The Magazine Academic All-District III team for men’s track & field and cross country, announced Thursday by CoSIDA (College Sports Information Directors of America). As a first-team selection, Bryfczynski is eligible for CoSIDA Academic All-America honors. That team will be announced June 23.

Bryfczynski is a two-time Academic All-ACC selection in cross country and was the team’s #2 performer during the 2007 fall season. He was 23rd individually at the ACC Championships, where he led the Tigers to a fourth-place team finish. He then recorded a career-best 35th-place finish at the Southeast Regionals in Louisville, KY.

A native of Marietta, GA, he earned his computer science degree at the May commencement ceremonies in just three years from Clemson.