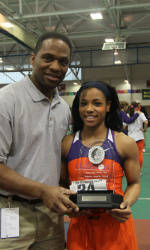 NAMPA, ID – Dezerea Bryant finished seventh in the women’s 200-meter dash and qualified for the final of the 60-meter dash as well Friday to highlight Clemson’s opening day of action at the NCAA Indoor Track & Field Championships. In addition to Bryant’s performances, Clemson qualified three additional members of its No. 4 women’s track & field team for Saturday finals as well as Spencer Adams from the men’s team.

Bryant had a time of 23.31 in the preliminary round for the 200, her second-best time of the season. She was consistent in the final with a time of 23.36, finishing fourth in her section and seventh overall. It is the highest finish by a Clemson female since Cydonie Mothersill won the national title in the 200 dash in 2001.

Brianna Rollins and Bridgette Owens both ran flawless races in the women’s 60 hurdle prelims. The defending NCAA champion Rollins improved on her personal best and Clemson record with a time of 7.93, fastest in the field and best by a collegian this season. Owens was right behind at 7.95, a personal best for the native of Michigan. Her time also ranks No. 2 in Clemson history. The two will compete in Saturday’s final at 8:45 PM Eastern.

Adams advanced to the finals of the men’s 60 hurdles for the first time since his red-shirt freshman season of 2010. He finished eighth in that meet. The Charlotte, NC native had a time of 7.74 in the preliminary round Friday and will run for the gold medal at 8:35 PM Eastern on Saturday.

Marlena Wesh made it to her second straight indoor final in the women’s 400 dash. The junior from Virginia Beach, VA won the opening heat with a time of 53.03, third-best of the qualifying round. She placed eighth last season and owned the nation’s best time in the event coming into the meet. Wesh will run the final at 9:05 PM Saturday.

Bryant qualified for the 60 dash final, prior to running a pair of 200-meter races Friday evening. Two weeks after winning the ACC championship, the freshman sensation out of Wisconsin ran a solid time of 7.26 out of lane eight and earned a spot in Saturday’s 9:25 PM final. Stormy Kendrick pulled up with 15 meters to go in the third and final heat with a cramp, forcing her to then miss the 200 prelims.

Jasmine Brunson will also be in action Saturday for the Tigers. The women’s triple jumper from Bermuda is scheduled to compete at 8:30 PM Eastern. Live coverage of the meet begins at 8 PM on ESPN3.