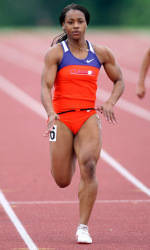 CLEMSON, SC – Dezerea Bryant and Warren Fraser won both short sprints contested Saturday at the Clemson Tiger Qualifier, the Tigers’ final home meet of the 2012 outdoor season. Bryant matched a personal best in the 200-meter dash with a time of 23.05, leading a sweep of the top three positions for Clemson.

Fraser earned the win in the men’s 100-meter dash after an outstanding jump out of the blocks. He ran a time of 10.42 on Saturday. He followed with a time of 21.09 in the 200-meter dash, besting the field of 11 sprinters.

Keni Harrison was impressive once again, as the freshman out of Clayton, NC improved her personal best for a second straight day in the women’s 100 hurdles. She won the event with a time of 13.03, one of the top-10 times in the country. Monique Gracia was third (13.27).

Spencer Adams took first in the men’s high hurdles against a slight headwind. He had a time of 13.75 to beat teammate Marcus Maxey, who was third with a time of 14 seconds flat.

Brianna Rollins ran a time of 54.91 in her first action since the preliminary rounds of the ACC Outdoor Championships three weeks ago. She won the women’s 400 dash.

Torian Ware was the Tigers’ top performer in the field Saturday. The freshman high jumper cleared the bar at 6’11.5″, an outdoor personal best, before missing three attempts at over seven feet. He won the event for the Tigers. In the women’s triple jump, April Sinkler was second with a leap of 42’6″. Her former teammate, Patricia Mamona, won as an unattached athlete at 43’9.75″. Mamona, two-time national champion in the event for Clemson (2010, 11), competed in her first meet since suffering a heel injury prior to the World Indoor Championships.

Marcus Brown took third place in the men’s shot put. A native of Gaithersburg, MD, the junior transfer put together a throw of 56’3.25′. Cory Thalheimer hit a mark that may be close enough to qualify for the NCAA East Prelims, finishing fourth with a throw of 55’10.25″

The next action for the Tigers will be the NCAA East Preliminary Round, set for May 24-26 in Jacksonville, FL.