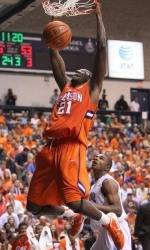 CLEMSON, SC – Clemson graduate Bryan Narcisse has accepted an invitation to compete in the 24th annual College Slam Dunk Contest on Thursday, March 29 in New Orleans, home of the 2012 Final Four. The State Farm College Slam Dunk & 3-Point Championships feature 24 of the best collegiate dunkers and sharpshooters, televised on ESPN from 9-11 PM (Eastern time). The eight-man dunk contest will take place at Fogelman Arena on the campus of Tulane University.

Narcisse will be the first player from Clemson to compete in the dunk contest. Amy Geren of the women’s team competed in and won the three-point contest in 1999, and then went on to beat the men’s winner, Arizona’s Jason Terry, in a head-to-head matchup. Terry is currently in his 13th season in the NBA.

Narcisse, a 6-foot-6 forward who hails from North Augusta, SC, earned his Clemson degree in communication studies in December. He played 102 games with 23 starts over his four-year career, helping Clemson to three consecutive NCAA Tournament appearances his first three seasons. Narcisse logged over 1,000 minutes in his career and made ESPN’s SportsCenter “Top 10 Plays” as a sophomore with his steal and dunk against Texas A&M in the 76 Classic.