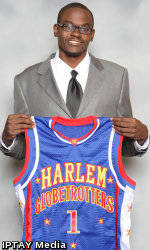 Narcisse, who finished third in the 2012 College Slam Dunk Contest, will have an opportunity to make the roster when the Globetrotters conduct their annual training camp in the fall. John “Moose” Campbell is the only former Clemson basketball player to suit up for the Globetrotters.

“I was aware they had a draft, and that they wanted to draft me,” Narcisse said. “But I wasn’t sure it would end up happening. By the grace of God it is, and I’m really thankful for that. There’s something to be said about what the Globetrotters do, and that’s take a positive message through basketball around the world. Having the chance to do that, I’m extremely excited to be a part of that.”

Narcisse helped Clemson to three straight NCAA Tournament appearances in each of his first three seasons. He played in 102 career games and over his final two seasons under Head Coach Brad Brownell, he played in all 65 with 21 starts. Narcisse won the team’s Tiger Pride Award in 2012, given to a player who goes above and beyond for the good of the team. He was a key reason the Tigers’ scoring defense was among the nation’s best each of the past two seasons.