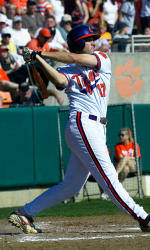 Shane Robinson extended his hitting streak to 39 games and Barret Browning shut down the Tiger offense in Florida State’s 3-1 win over Clemson Saturday night in front of 5,363 fans at Dick Howser Stadium in game one of a three-game series. The #6 Seminoles improved to 28-6 overall and 6-1 in the ACC, while Clemson fell to 14-10 overall, 5-2 in ACC play. The loss, which gave sole possession of second place in the ACC to Florida State, broke Clemson’s five-game winning streak overall and four-game winning streak against top-25 teams. Prior to the game, the field was dedicated and renamed Mike Martin Field in honor of the longtime and current Seminole head coach.

Browning (3-0), a lefthander, allowed just three hits and one unearned run in a career-high 7.2 innings pitched to earn the win. He also walked two and struck out eight in the longest outing by a Seminole in 2005. Tyler Chambliss recorded his eighth save of the year by pitching a scoreless ninth inning. Tiger starter Josh Cribb (2-3) suffered the loss. He allowed three runs (two earned) on nine hits in 4.0 innings pitched. Reliever Stephen Faris lowered his ACC-leading ERA to 0.33 by pitching 4.0 scoreless innings, allowing just one hit and two walks while striking out six.

Four Seminoles had two hits apiece, as Florida State totaled 10 hits in all. Tony Thomas, Jr. accounted for two of the team’s three RBIs as well. Andy D’Alessio had two of the Tigers’ four hits and scored the team’s lone run.

After both teams left two runners on base in the first inning, Florida State took a 2-0 lead in the second. Ryne Malone led off with a bunt single and went to second on Ryne Jernigan’s sacrfice bunt. Cribb then tried to throw an inside fastball past Thomas on a 2-2 pitch, but the freshman turned on it and doubled over Tyler Colvin in left field, scoring Malone. Bryan Henry followed with a soft single to center to plate Thomas. Robinson then lined a single up the middle, extending his hitting streak to 39 games, two away from the ACC record held by former Tiger Rusty Adkins (1965-66). However, Florida State was not able to put across any more runs in the frame.

Florida State added to its lead in the third inning by a run. Brant Peacher and Malone hit one-out singles and the Seminoles loaded the bases when Adrian Casanova was called for cather’s interference. Thomas’ groundout to second base scored Peacher, but Cribb was able to strand two more baserunners for the third straight inning.

Thanks to another miscue by a catcher, the Tigers were able to get on the board in the fifth inning. D’Alessio led off with a double down the right-field line and advanced to third when Aaron Cheesman was unable to hold on to a missed third strike (swing) by David Williams, allowing Williams to reach. Herman Demmink followed with a sacrifice fly to left field, plating D’Alessio.

Faris entered the game in relief of Cribb in a dicey situation in the fifth inning, but was able to work out of it to keep the Seminole lead at 3-1. Jack Rye and Peacher led off with singles off Cribb, but Faris got Malone to fly out to right. Then on a suicide squeeze bunt back to Faris, he flipped the ball home with his glove, as Casanova tagged out Rye for out #2. Thomas flied out to center to end the threat.

Faris worked the Tigers out of another jam in the sixth inning to keep Clemson within reach. A single to right by Henry and walk by Robinson put runners on first and second with no outs. Gibbs Chapman bunted the runners up a base, but Faris was able to strike out Cheesman on three straight pitches after throwing two balls. Rye walked to load the bases, but Faris again struck out a Seminole, this time Peacher looking.

Clemson put the tying runner on base in the ninth inning, but could not come through with a clutch hit. Pinch-hitter Brad Chalk drew a one-out walk and D’Alessio followed with a single through the right side. But pinch-hitter Jesse Ferguson popped up and Williams struck out to end the game.

Clemson and Florida State will play a doubleheader Sunday starting at 1:00 PM. The first game will be televised live by Sun Sports.