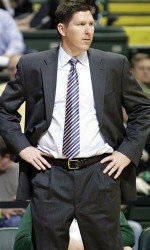 CLEMSON, SC – Brad Brownell, who led Wright State to four consecutive 20-win seasons and has averaged nearly 21 wins per year in his eight years as a Division I head coach, has been named Head Basketball Coach at Clemson University.

Brownell has a career record of 167-85, and the .663 winning percentage is ranked in the top 30 nationally among active Division I coaches. The percentage is third among current active ACC coaches. Only Hall of Fame coaches Roy Williams of North Carolina and Mike Krzyzewski of Duke are higher.

“Brad Brownell is an unbelievable coach,” said Butler Head Coach Brad Stevens, who coached against Brownell in the Horizon League. “He has been a winner every where he has been. I am happy to see Brad go to a great school and a great program like Clemson. He is a quality coach and a quality person. Clemson has hired a big time basketball coach.”

“This is a good hire for Clemson,” said former Clemson Head Coach Rick Barnes, now the head coach at Texas. “He really wanted the job and that is important. His teams play a similar style to what we did at Clemson and I feel that style can be successful at Clemson. One of my current assistants (Rodney Terry) was an assistant with Brad at UNC Wilmington. He said Brad will have his teams prepared (for the opposition) very well.”

In each of his two previous head coaching stops he has taken the program to a school record number of wins as a Division I program. He had a 25-win season at UNC Wilmington in 2005-06 and a 23-win season at Wright State in 2006-07.

Brownell was named the seventh head coach in Wright State history on March 31, 2006. His very first year, he led the Raiders to the NCAA Tournament for the first time since 1993. The team had a 23-10 final mark, and established a record for wins since the program became Division I in 1987.

That 2006-07 team finished with a 15-3 record against Horizon League competition, including two conference tournament wins that gave Wright State the league championship. The 23 wins included a pair of wins over a 27-7 Butler team that would reach the Sweet 16 of the NCAA Tournament. Brownell’s first Wright State team reached the NCAA Tournament where it was defeated by third-seeded Pittsburgh.

In 2007-08 he guided Wright State to a 21-win season and a second-place finish in the Horizon League. The season featured a 12-6 conference record, including a victory over Butler in the regular season, one of just four losses for the Bulldogs in 34 games that year.

The 2007-08 team finished 14th in the nation in scoring defense and 30th in he nation in three-point shooting at 39 percent. That year, he coached the Horizon League Player of the Year, a first-team selection, an all-league defensive team member and two All-Newcomer members.

UNC Wilmington posted a 25-8 mark his final season, 2005-06, including a victory over Final Four participant George Mason, and won the CAA Tournament. The Seahawks lost in overtime to George Washington, 88-85, in the NCAA Tournament that year.

His first UNC Wilmington team (2002-03) won 24 games and won the CAA postseason tournament. His club lost in the first round of the NCAA Tournament to defending national champion Maryland on a shot at the buzzer, 75-73.

His four-year Colonial Athletic Association record was 61-22, the best league mark during the period. Brownell was twice named the CAA Coach of the Year (2003 and 2006). He coached five All-CAA performers, one CAA Player of the Year, four All-Defensive Team selections, one Defensive Player of the Year and seven CAA All-Academic honorees.

Brownell began his coaching career as a graduate assistant at Evansville under Jim Crews in 1991-92 and he helped that program to a 24-6 record. He served as an assistant at the University of Indianapolis in 1992-93 and 1993-94.

He then started a 12-year-run at UNC Wilmington, eight as an assistant or associate head coach, and four as the head coach. He was an assistant for the Seahawks from 1994-95 through 2001-02. His final year as an assistant under Jerry Wainwright, UNC Wilmington posted a 23-10 record, including a 17-4 mark vs. conference teams. That team defeated Southern California in the first round of the NCAA Tournament in overtime.

Brownell earned his Bachelor’s Degree from DePauw University in 1991 and completed his Master’s Degree at the University of Indianapolis in 1994. He is a graduate of Harrison High School in Evansville, IN where he was a high school teammate of Calbert Cheaney, who later became the National Player of the Year in 1993 at Indiana.

Brownell and his wife Paula have two daughters, Abby and Kaitlyn.