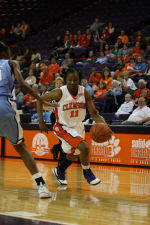 GREENSBORO, NC – Clemson rookies Christy Brown and Lele Hardy were selected to the 2007 Atlantic Coast Conference All-Freshman Team, as announced by the conference office on Tuesday afternoon. The Lady Tigers were the only school with multiple members on the team.

“I am really excited for both players,” Head Coach Cristy McKinney said. “Lele has had a tremendous year and is only going to get better. Christy has had a solid year as well, and I am glad that she was recognized for it.”

Hardy was a two-time ACC Rookie-of-the-Week honoree and led all conference freshman with a 7.0 rebounding per game. She tied for the league lead with a 3.28 steals per game average, setting a Clemson freshman record 95 steals this season. Her 95 steals also rank second overall in school history and are tied for fourth in ACC freshman history. The Spartanburg, SC native is the only Clemson player to have earned the starting assignment in all 29 games this season and boasts an 11.6 scoring average.

Brown ranks fourth in the conference with a 4.66 assists per game figure, which also leads all conference freshmen. She has started 28 of 29 games this season and is averaging 7.9 points per game. The native of Atlanta, GA has also tallied 40 steals this season with a 2.0 rebounding average.

Brown and Hardy are just the fourth and fifth players in Clemson history to be named to the ACC all-rookie team, as they joined Amy Geren, Chrissy Floyd and Amanda White. White was the most recent honoree, earning the selection in the 2002-03 season.

Virginia’s Monica Wright was named the ACC Rookie-of-the-Year, while Florida State’s Jacinta Monroe and Wake Forest’s Mekia Valentine round out the five-member team.

The rookie of the year and all-freshman team were determined by a vote of 55 members of the Atlantic Coast Sports Media Association.