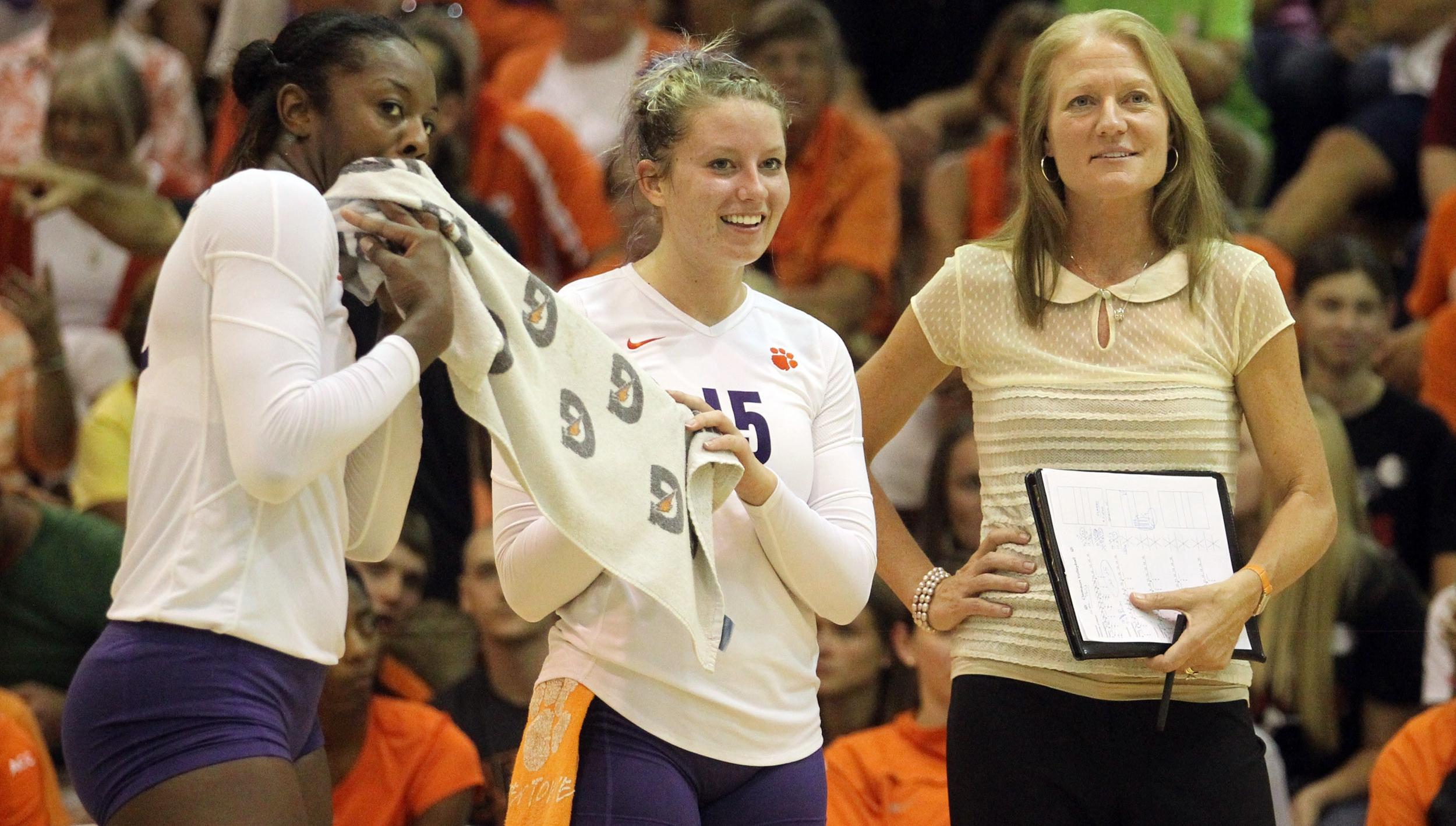 CLEMSON, SC – The Clemson volleyball team defeated Winthrop (25-21, 19-25, 25-22, 25-18) and Furman (23-25, 27-25, 25-17, 25-19) on Saturday to claim the 2013 Big Orange Bash Championship. Senior setter Hannah Brenner was named the Most Valuable Player of the Tournament as the Tigers (4-2) went 3-0, including their 3-2 win over South Carolina (3-3) on Friday.  Winthrop (6-1), who finished 2-1, was the runner-up, Furman (1-6) took third with a 1-2 record, and South Carolina went 0-3 on the weekend. Senior Mo Simmons earned her ninth career All-Tournament honor, and newcomer Beta Dumancic earned her first as a member of the Tigers.  “I felt like we got better as the tournament went on and that’s always a very positive thing to see,” said Head Coach Jolene Hoover. “Our hitting percentage got better.  We hit .346 tonight and a lot of that is due to Hannah and her choices.” Brenner tallied the third double-double by a setter in school history, and the first since now-Assistant Coach Kelsey Murphy had 11 blocks, 55 assists, and 11 digs in 2008. The other was on the sidelines for Furman, Head Coach Michelle (Thieke) Young.  “It’s pretty amazing,” said Brenner. “I knew I was close last year.  I wasn’t aiming for that.  That’s not a goal of mine, but to have that it’s pretty impressive.  Passing and our team dynamic is what really helped us win this.  Especially in this final set – going in there with this team dynamic.  We were just connecting in passing, and people stepped up and it was great.”   Brenner tallied 50 assists, 19 digs, and 10 kills, the last of which came on match point to put the Paladins away. During the match, she also became the 6th player in Clemson history to 3,000 career assists. The Tigers have seen their hitting percentage improve by nearly 50 points each in the last four matches, culminating in a .346 figure on Saturday night. Brenner has led that charge, successfully connecting on a remarkable 50 of 104 set attempts against the Paladins and 45 of her 97 attempts against Winthrop.  Not to be lost in the shuffle was the performance of both Dumancic and Simmons. The Croatian had 30 kills against just two errors in 56 attacks (.500), and led the tournament with 18 blocks, an average of 1.38 per set. Simmons was equally impressive, finishing second among all players with 60 kills, an average of 4.62 per set, and sixth with a .327 hitting percentage. On Saturday night, she finished with 24 kills, one shy of her career high, and did so hitting an efficient .420, to go along with 13 digs.  “I think this is always a great tournament,” said Hoover.  “It’s very competitive in-state teams.  To play South Carolina Friday night, and then come back in the morning when you’re pretty emotionally drained after a big rival to work through the Winthrop match – and Winthrop was a very good team – you have a tendency to play flat after the big emotional one the night before.  I’m very proud of how they worked their way through that one and Winthrop did a nice job.”  Other standout performers for the Tigers include libero Kristin Faust, middle Karis Watson, and freshman hitter Leah Perri. Faust had 53 digs for an average of 4.08 per set, and posted a double-double with 19 digs and a career-high 12 assists from the libero spot on Saturday night.  Perri was quietly one of the Tigers’ top options, finishing with 36 kills overall and hitting .371, the seventh and third best marks in the tournament, respectively.  In the first match of the day, the Tigers earned a 3-1 win over the Eagles, who were 5-0 entering the match. Clemson hit .294, including .333 and .387 in the final two sets to clinch the win. Watson posted a career-high 16 kills in only 28 swings, while Simmons added 13 kills. Beta Dumancic had seven kills on 17 swings, with six blocks, and freshman Leah Perri had nine kills. Libero Kristin Faust had a team-high 16 digs, while Simmons added 12. Against Furman, Clemson rode hot-hitting to the championship. After being held to a .190 mark in the first set, the Tigers had 57 kills against 10 errors the rest of the way, and were able to side out on 68 percent of their chances overall, including 29-37 in the final two sets. Clemson’s 73 kills were the most since tallying 76 against No. 22 Miami in 2011. The Tigers used eleven different players, and saw two freshman players, Alex Lynch and Milica Stamenic, make their Clemson debuts.  Clemson returns to action this week in Atlanta as they’ll take on Georgia State on Thursday and UCF on Friday.  All-Tournament Team: