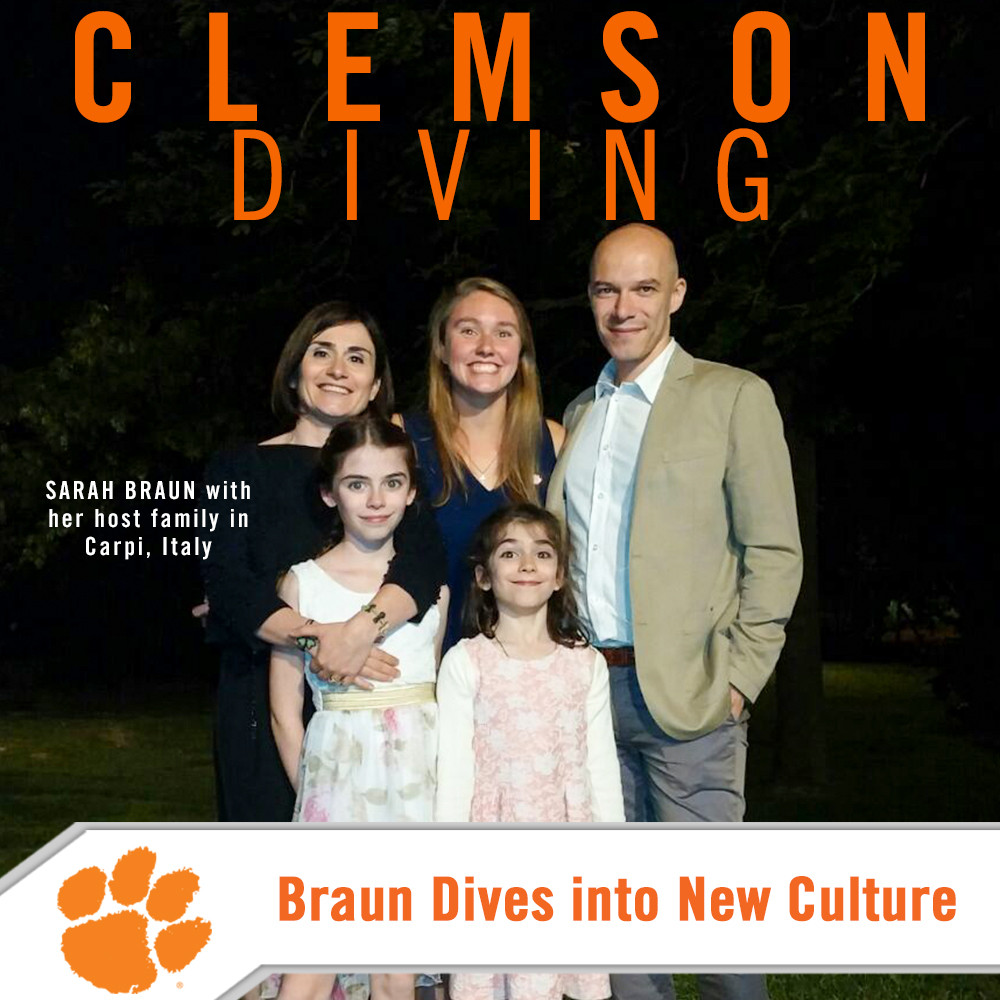 During the month of May, rising senior diver Sarah Braun went on the study abroad trip of a lifetime. The elementary education major from Beaverton, Ore. always wanted to study abroad, but had nearly accepted that she wouldn’t have the opportunity; then came the e-mail.

Braun was invited to study abroad with an organization called International Teaching Experience, which sends education majors to other countries to teach English and about the American culture. The program was primarily based out of the University of Kansas, however students from other universities were also allowed to participate. Just like that, Braun was on her way to Carpi, Italy, a town of roughly 70,000 people, located just south of the mountains in Northern Italy.

While in Carpi, Braun lived with a host family – a mother, father and two daughters, who she came to view as her own sisters – during the one-month visit. The oldest daughter was in sixth grade and spoke enough English that she enjoyed practicing with Braun. The youngest daughter, a third grader who had not yet begun learning English, was still able to communicate with Braun, and the two formed a close bond. When she left to head back to the U.S., the young girl was very sad to see her leave, and Braun found it amazing that she felt so close to the girl and her family after bonding for such a short time.

Prior to traveling to Italy, Braun studied Italian online for three months, and felt she knew enough to get by, but definitely did not know it well enough. While in Carpi, all classes were taught in Italian except for the 30 minutes that were spent teaching English to the Italian students. Braun and her study abroad classmates were each required to teach three different class sessions, all related to American culture, to the Italian students. Braun’s subjects were American football, dangerous animals of North America and a fictional book about moving to a new school in a place where you don’t speak the native language.

Braun found teaching in Italy to be quite different from teaching in the U.S., at least at the elementary school level, which is where most of her experiences have been. She particularly enjoys teaching elementary-age children because of the excitement she feels and sees when a child’s face lights up as he or she learns something new or figures out the answer to a problem. In the U.S., teaching is primarily done in groups with many group activities, and children are taught to work with technology starting at very young ages (nearly every room in American public schools have smart boards). In Italy, they largely still use chalkboards to teach the fundamentals of math, science and language.

When asked if her experiences as a collegiate diver helped her prepare for the study abroad experience, Braun answered confidently that diving since the age of seven, and also having taught diving, has provided her with patience. The sport of diving requires a great commitment, of both time and attention to detail in practice, in order to perfect the form of each dive. This requirement has instilled patience in Braun, and has enabled her to display that patience in the classroom setting, both in the U.S. and in Italy. The fact that the majority of the children she taught in Italy did not speak any English meant that it was all the more important for Braun to show patience.

Another way Braun feels the study abroad experience will benefit her in her teaching career was the feeling of living and learning to function in daily life in a place where she did not fully understand the language. Down the road, when Braun has a student in her class whose first language is not English, she will be able to use her experiences in Italy to understand and be a better teacher for that student.

It was obvious after listening to her talk about the experience that studying abroad in Italy was a trip of a lifetime for Braun. She truly valued the fact that she was able to combine so many different interests into one trip – traveling to and taking part in the culture and customs of Italy, working with children and teaching children about a new language and culture. It was an unforgettable experience for Braun, and one she will treasure and continue to learn from as she finishes college and begins her career as a teacher.