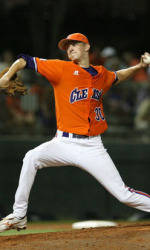 Brady, a member of the Youse’s Orioles, was 2-2 with a 1.53 ERA in five starts. In 29.1 innings pitched, he threw two complete games and allowed just 17 hits (.162 opponents’ batting average), no homers, and five walks with 38 strikeouts. Lamb, a member of the Peninsula Pilots, batted .236 with 26 stolen bases in 29 attempts and struck out 32 against only 10 walks in 30.1 innings pitched over six starts on the mound.

Brady and Lamb were both named to their respective league’s All-Star teams. Rising junior outfielder Chris Epps (Stone Mountain, GA) was also named to the Coastal Plain League All-Star team after he batted .344 with 10 doubles, five triples, six homers, a .470 on-base percentage, and 12 steals in 33 games for the Thomasville Hi-Toms.