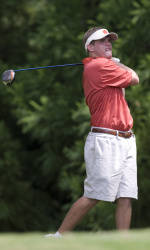 Clemson, SC-Clemson sophomore Brewer Bradshaw was defeated by former Furman All-American Todd White in the championship match of the South Carolina Amateur Match Play championship on Sunday. White won the title 2-up in the event played at the Grand Dunes Club at Myrtle Beach, Sc.

The match started out as a very polite affair with fairways, greens and routine two-putts. The only excitement came on the 460 yard par four 7th when Bradshaw almost holed his second to square the match. A routine birdie on # 9 by White put him one up as they headed for the final nine.

After pars on the 10th things started to heat up. Brewer dropped a 45′ bomb on #11 and Todd topped him from 7′ for the halve. Both birdied from 7′ on the par five 12th as Bradshaw matched White’s four. On the par four 14th it was Todd’s turn to halve a 10′ birdie from Bradshaw with a 4 footer of his own. Brewer missed a good chance to square the match on 17 when his 7 footer burned the edge so they went to 18 with White 1 up. Bradshaw’s approach came to rest 15′ from the hole and White responded with a clutch iron to within 6 feet. Brewer burned the edge again then conceded White’s putt to give Todd his third SC Amateur Championship, 2 up.

White joins Bert Atkinson and Barry Black as the only three time champions. Todd’s win spans a remarkable 19 years since his first victory in 1991. He went the entire match play segment an amazing 45 holes without a bogey and missed just two greens and one fairway. He tallied 25 birdies and an eagle to compliment his stroke play medalist honors.