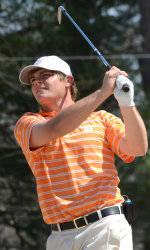 CLEMSON, SC – Clemson freshman Thomas Bradshaw and sophomore Crawford Reeves were named to the All-ACC Academic golf team for 2011 on Tuesday. It is the first selection for Bradshaw and the second for Reeves. Bradshaw is a pre-business administration major, while Reeves is in marketing.

Reeves was second on the Clemson team in stroke average this year with a 73.06 average and he had 10 rounds under par, including a team best seven rounds in the 60s. He was Clemson’s best golfer over the last six tournaments of the year when he finished in the top 16 in every event, including three top 10 finishes. He was seventh at the NCAA Regional in Erie, CO.

Bradshaw did not play until the second semester, but he had a 74.07 stroke average in five events and had three-under-par rounds and one in the 60s. That round in the 60s was a team best 64 in the final round of the Furman Invitational when he led the Tigers to the tournament team title. He finished third individually with a 209 figure. His 64 tied for the best final round score in Clemson history.