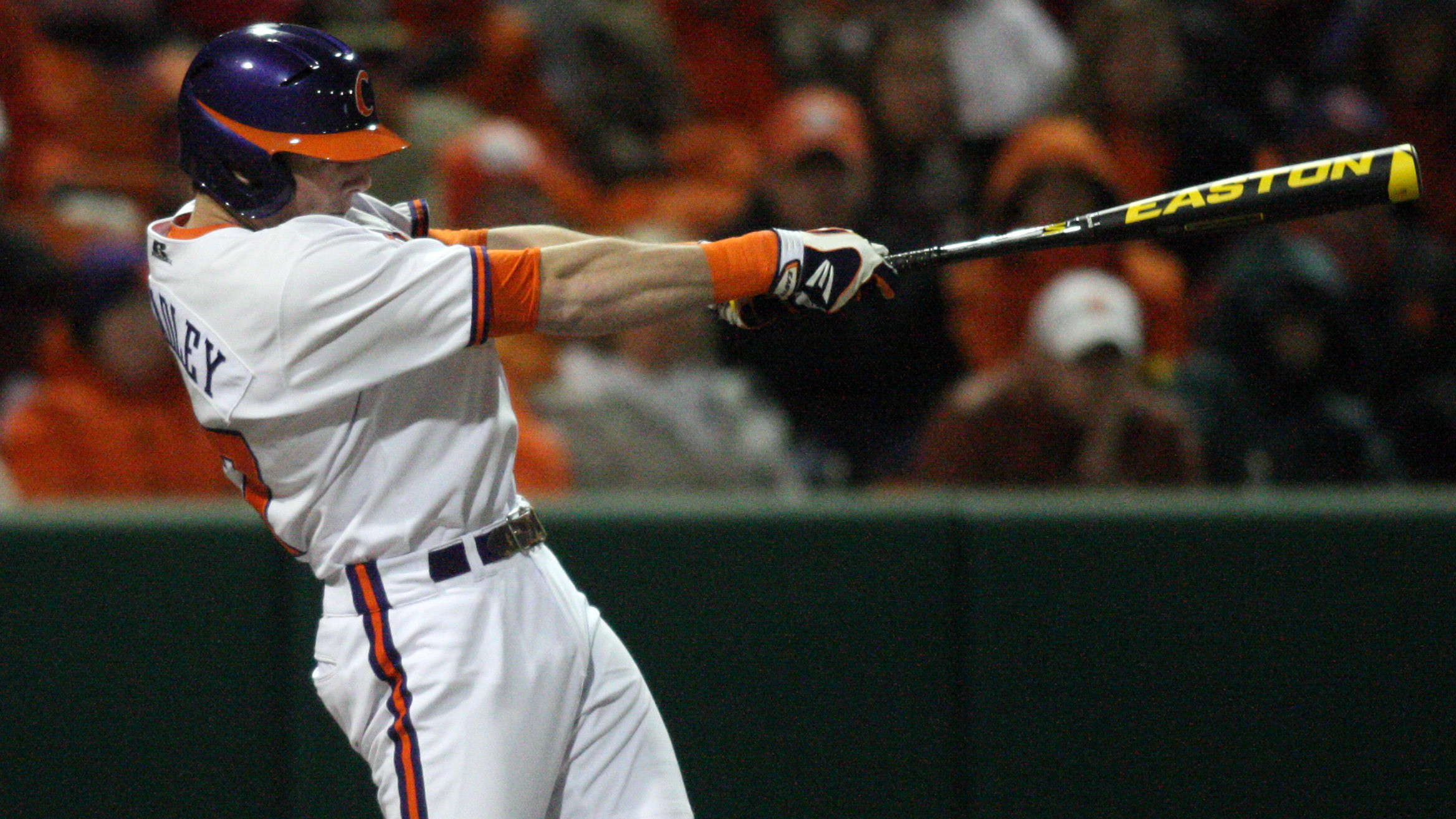 Freshman Kevin Bradley hit a three-run, walkoff homer with one out in the ninth inning to lift #14 Clemson to an 8-7 win over USC Upstate at Doug Kingsmore Stadium on Tuesday night.  The Tigers, who won their eighth game in a row, improved to 38-15 with their dramatic victory in their regular-season home finale.  The Spartans fell to 25-26 in 2013.

Clemson jumped out to a 4-0 lead with four runs in the second inning, but the Spartans responded with six runs in the third inning and maintained a 6-4 lead until the eighth inning.  Clemson scored a run in the eighth, then USC Upstate answered again with a run in the top of the ninth inning to take another two-run lead.

The Tigers put two of their first three batters on base in the bottom of the ninth inning, then Bradley, a switch-hitter who was batting lefthanded, belted the first pitch to deep left field.  Leftfielder Tyler Lesch gave a valiant effort with a leaping attempt, but the ball cleared his glove by inches for the game-winning homer.

It was the Pennington, NJ native’s first career home run.  Bradley was a last-minute addition to the starting lineup at first base due to Jon McGibbon‘s illness.  McGibbon started the first 52 games of the season at first base.

Bradley, who went 2-for-3 with two runs, one walk, and one hit-by-pitch, became the first Tiger to have his first career long ball be in walkoff fashion since Brian Kowitz accomplished the feat with a solo homer against Georgia in Clemson’s 13-12 win on February 25, 1988.  It was also the fifth time in school history a Tiger hit his first career home run in walkoff fashion.

Scott Firth (6-4), the last of six Tiger pitchers, earned the win.  He gave up one run on one hit in 1.0 innings pitched.  Jonathan Meyer tossed 3.2 scoreless innings in relief with four strikeouts as well.

The Tigers took the game’s first lead in the second inning.  Shane Kennedy lined a one-out single to right-center to extend his hitting streak to 10 games and Tyler Krieger reached on a throwing error on his sacrifice bunt.  Bradley was hit-by-pitch to load the bases, then Thomas Brittle laced a single to right field to score Kennedy.  Tyler Slaton was hit by a 1-2 pitch to plate Krieger.  Two batters later, Steve Wilkerson grounded a two-out single through the left side to score Bradley and Brittle, giving Clemson a 4-0 lead.

In the third inning, nine straight Spartans reached base with one out, as USC Upstate scored six runs.  Tyler Miller reached on an error by Krieger at short, Jordan Stampler walked, and Gaither Bumgardner singled to right-center to load the bases.  Luke Weber was hit-by-pitch to score Miller, then Brody Greer was hit-by-pitch to score Stampler.  Lesch unloaded the bases with a three-run triple over the head of Brittle in center to score Bumgardner, Weber, and Greer, giving the Spartans the lead.  Brandon Patterson followed with a single up the middle to score Lesch.

Bradley led off the eighth inning with walk, but was erased on Brittle’s fielder’s choice.  After pinch-hitter Joe Costigan walked, Maleeke Gibson singled through the right side to score Brittle.  But for the fifth inning in a row, Clemson stranded a runner at second base after Steven Duggar grounded out to short in a close play at first base.

The Spartans added an insurance run in the top of the ninth inning.  Lesch led off with a four-pitch walk and advanced to second on Erik Samples’ sacrifice bunt.  Trey Richardson then ripped a single off Kennedy’s glove at third to score Lesch.

Garrett Boulware led off the bottom of the ninth inning with an infield single and Kennedy grounded out to first.  After Krieger walked, Bradley, who entered the plate appearance with two career RBIs, belted the first pitch over the fence in left field for an opposite-field, game-winning home run.

Along with Bradley, who totaled career highs for runs, hits, and RBIs, Wilkerson went 2-for-5 with a double and two RBIs.

Bumgardner went 4-for-5 with a run to lead the Spartans, who outhit the Tigers 11-8.  Lesch added two runs and three RBIs as well.

Clemson will conclude the regular season with a three-game series at #8 Florida State starting Thursday at 6:00 PM.