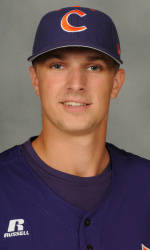 Junior lefthander Jed Bradley allowed one unearned run in a complete game and Sam Dove went 5-for-5 to lead #9 Georgia Tech to a 5-1 victory over #23 Clemson in front of 5,377 fans at Doug Kingsmore Stadium on Saturday afternoon. The Yellow Jackets, who evened the series 1-1, improved to 31-13 overall and 18-5 in the ACC. The Tigers fell to 28-15 overall and 12-11 in ACC play.

The Yellow Jackets took advantage of two walks and a hit-by-pitch to lead off the game in the first inning to score three runs. Down 4-0 in the bottom of the sixth inning, the Tigers fought back with a run and had the bases loaded, but Bradley induced a groundout to end the inning and the Tigers were unable to put a baserunner in scoring position during the last three innings.

Bradley (5-2) pitched his first career complete game to earn the win. In 9.0 innings pitched, he allowed seven hits (all singles), one unearned run, and one walk with three strikeouts in throwing just 99 pitches. He did not allow a Tiger leadoff batter to reach base as well.

The Yellow Jackets wasted little time taking the game’s first lead with three runs on only one hit in the first inning. Kyle Wren led off with a walk, Jacob Esch was hit-by-pitch, and Matt Skole walked on eight pitches to load the bases with no outs. Jake Davies hit a sacrifice fly to deep right field to score Wren and move both runners up a base. Two batters later, Dove hit a two-out single to center to score Esch and Skole.

After four scoreless innings, the Yellow Jackets added to their lead in the top of the sixth inning. Brandon Thomas led off with a walk, advanced to second on Wren’s groundout to second, and moved to third on Esch’s groundout to second. Skole then blooped a two-out single down the left-field line on an 0-2 pitch to score Thomas.

Clemson finally dented the scoreboard in the bottom of the sixth inning. Brad Miller reached on a one-out, bad-hop single to extend his hitting streak to 10 games. Two batters later, Jeff Schaus lined a two-out single to left field. Will Lamb followed with a single through the left side to score Miller and up his hitting streak to 18 games. Spencer Kieboom reached on a fielding error by Skole to load the bases, but Dominic Attanasio grounded out to second base to end the inning.

In the eighth inning, Thomas led off with a double to right-center and advanced to third on Wren’s sacrifice bunt. Esch then laid down a suicide-squeeze bunt to plate Thomas.

Dove went 5-for-5 with two RBIs and a steal to lead Georgia Tech, who outhit the Tigers 10-7 and put five leadoff batters on base. Dove became the first Tiger opponent to total five hits in a game since 2006. Thomas went 2-for-3 with a double, two runs, and a walk.

Clemson and Georgia Tech will play the finale of the three-game series on Sunday at 1:00 PM. The Tigers’ six seniors will be honored on the field prior to the game.