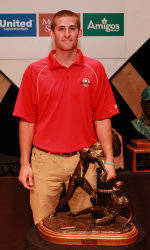 Clemson junior Brad Miller (Windermere, FL) received the Brooks Wallace Shortstop-of-the-Year Award, presented Sunday in Lubbock, TX. The award was presented along with four other national awards on the same night that the 2011 Hall of Famers were inducted. The awards show and induction ceremony were combined this year to create College Baseball’s Night of Champions.

The late Bill Wilhelm, who won 1,161 games as Clemson head coach from 1958-93, was one of the Hall of Fame inductees during Sunday’s ceremony. In February, it was announced that Wilhelm was one of seven members of the 2011 Hall of Fame class.