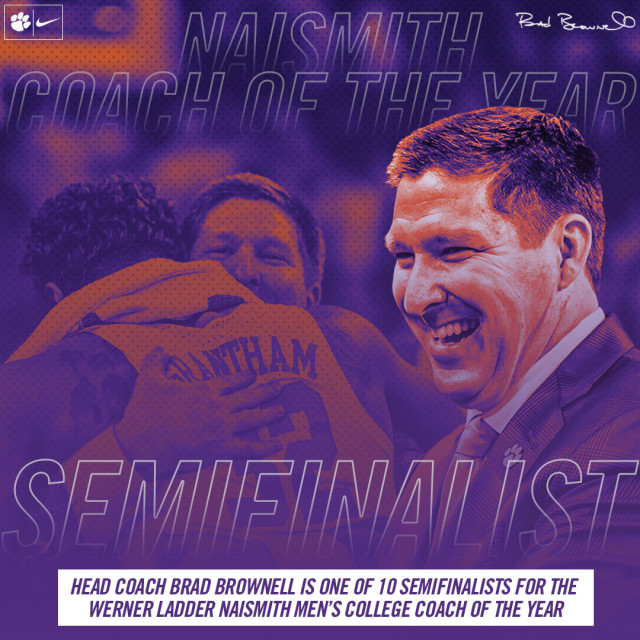 Brad Brownell Named Semifinalist for Naismith Coach of the Year

TLANTA — Clemson University men’s basketball’s head coach Brad Brownellhas been named a semifinalist for the Werner Ladder Naismith Men’s College Coach of the Year award, announced today by the Atlanta Tipoff Club. Brownell is one of 10 total coaches in the running for Coach of the Year honors.

Coach Brownell has led his 2017-18 Tigers squad to its 14th 20-win campaign and the team currently sits 20-7 overall and is tied for fourth place in the ACC (9-6). Before the season, Clemson was picked to finish 13th by the media. As it stands, a nine-place improvement from preseason to postseason would be the highest differential in ACC history.

Using the list of 10, the Naismith Awards master voting academy will identify four finalists, to be announced on March 15.

The Werner Ladder Naismith Trophy for Men’s College Coach of the Year will be announced on during the Naismith Awards brunch April 1 at Pearl Stable in San Antonio, Texas.

Fans will be able to vote for head coach Brad Brownell if he’s named a finalist by visiting naismithtrophy.com/vote between March 19-30 to cast their ballot, which will account for five percent of the final tally.

Founded during the 1956-57 season, the Atlanta Tipoff Club is committed to promoting the game of basketball and recognizing the outstanding accomplishments of those who make the game so exciting. The Atlanta Tipoff Club administers the Naismith Awards, which have become the most prestigious national honors in all of college basketball. Named in honor of Dr. James Naismith, inventor of the game of basketball, the Naismith Trophy recognizes the top Men’s and Women’s College Basketball Players of the Year. Other Naismith Awards are presented to the Men’s and Women’s College Basketball Coaches of the Year, Boys’ and Girls’ High School Basketball Players and Coaches of the Year, Basketball Officials and Outstanding Contributors to the game. Celebrating its 50th year by honoring past winners, the Citizen Naismith Trophy was first presented to UCLA’s Lew Alcindor (later known as Kareem Abdul-Jabbar) in 1969. Old Dominion’s Anne Donovan won the inaugural Women’s Citizen Naismith Trophy in 1983.