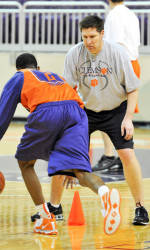 CLEMSON, SC – Men’s basketball coach Brad Brownell has announced openings for both of his summer camps, the boys individual/overnight camp held June 13-16 as well as the team camp held June 18-20. Brownell and his coaching staff will be in charge of instruction for both camps, which will be held on the Clemson University campus.

The boys individual/overnight camp will be held Sunday, June 13 through Wednesday, June 16. Three different packages are offered for campers. The rate for campers requiring room and board is $425, which includes meals provided at the dining halls. The rate for commuter campers is $275. Lunch and dinner will be provided for commuters. The rate for day campers is $180, excluding the cost of meals. Boarding and commuter packages are available to boys entering fourth through the 12th grade, while day camp packages are available to boys entering second through fifth grade.

The Brad Brownell Team Camp will be held Friday, June 18 through Sunday, June 20. Teams must consist of a minimum of eight players, and play will be divided into five levels (three at varsity level, two at junior varsity level). The overnight rate is $230 per camper. The commuter rate is $160 with all meals paid, or $130 without paid meals, or $70 with no meals and no games on Sunday.

For more information on the team camp, contact Director of Basketball Operations Dick Bender at 864-656-1968 or by email at dbender@clemson.edu.