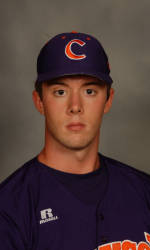 Meanwhile, the Tiger bats pounded out 14 hits, led by Boyd’s and Paulsen’s four-hit game. Boyd, who went 3-for-3 against UNC Wilmington on Sunday, had a hit in each of his first four at-bats to give him seven consecutive hits before he grounded out in his last at-bat. He also added a double, triple, two runs, and three RBIs in the game. He is 9-for-11 (.818) in the last three games as well.

Paulsen’s two-run homer in the third inning highlighted his offensive output. In five career games at Fluor Field, the junior is 15-for-22 (.682) with four doubles, two homers, 10 RBIs, and nine runs.

The Tigers wasted little time taking the game’s first lead in the first inning. Chris Epps led off with a walk on four pitches and went to third on Mike Freeman’s double to left field. The two-bagger extended Freeman’s hitting streak to 10 games, the longest by a Tiger in 2009. After the next two Tigers were retired and Kyle Parker walked to load the bases, Boyd belted the first pitch to left-center for a two-out, three-run double.

In the third inning, Jeff Schaus led off with a walk and Paulsen followed with a two-run homer to right-center, his 11th long ball of the season.

The Tigers added to their lead in the top of the fifth inning. Boyd led off with a single through the right side and Brad Miller followed with a walk. After John Nester grounded into a 4-6-3 double play, Jason Stolz reached on a bunt single to score Boyd, giving the Tigers a 6-0 lead.

Will Miller put the Paladins on the scoreboard when he led off the bottom of the fifth inning with a home run to left field, his fifth long ball of the season.

In the seventh inning, Boyd led off with his fourth hit of the game and seventh hit in a row over the last two games. His single down the right-field line, Brad Miller bloop single to left-center, and Nester’s sacrifice bunt put runners at second and third. Stolz then singled to left-center to score two runs, upping the Tigers’ lead to 8-1.

But the Paladins put together a rally of their own in the eighth inning to narrow the margin. Marcus Rose led off with a single through the left side and scored on Justin Holloway’s double to right-center. After the next two Paladins were retired and Reese Wade walked, Campbell Lewis hit a three-run homer to left-center, his fifth long ball of the season, to cut Clemson’s lead to 8-5.

After Andrew Cadger followed with a double to left, the Tigers called on Sarratt. The junior righthander retired the next four Paladins to close out the three-run win for the Tigers.

Along with four hits by both Boyd and Paulsen, Stolz went 2-for-3 with a career-high three RBIs, two walks, and a stolen base. In the freshman’s last three games, he is 5-for-7 (.714) with five RBIs, four runs, and five walks.

Holloway led Furman’s 10-hit attack by going 3-for-5 with two doubles and an RBI.

Clemson will play its final home game of the regular season on Tuesday when it hosts College of Charleston at 6:30 PM. The Cougars own the nation’s longest active winning streak at 10.