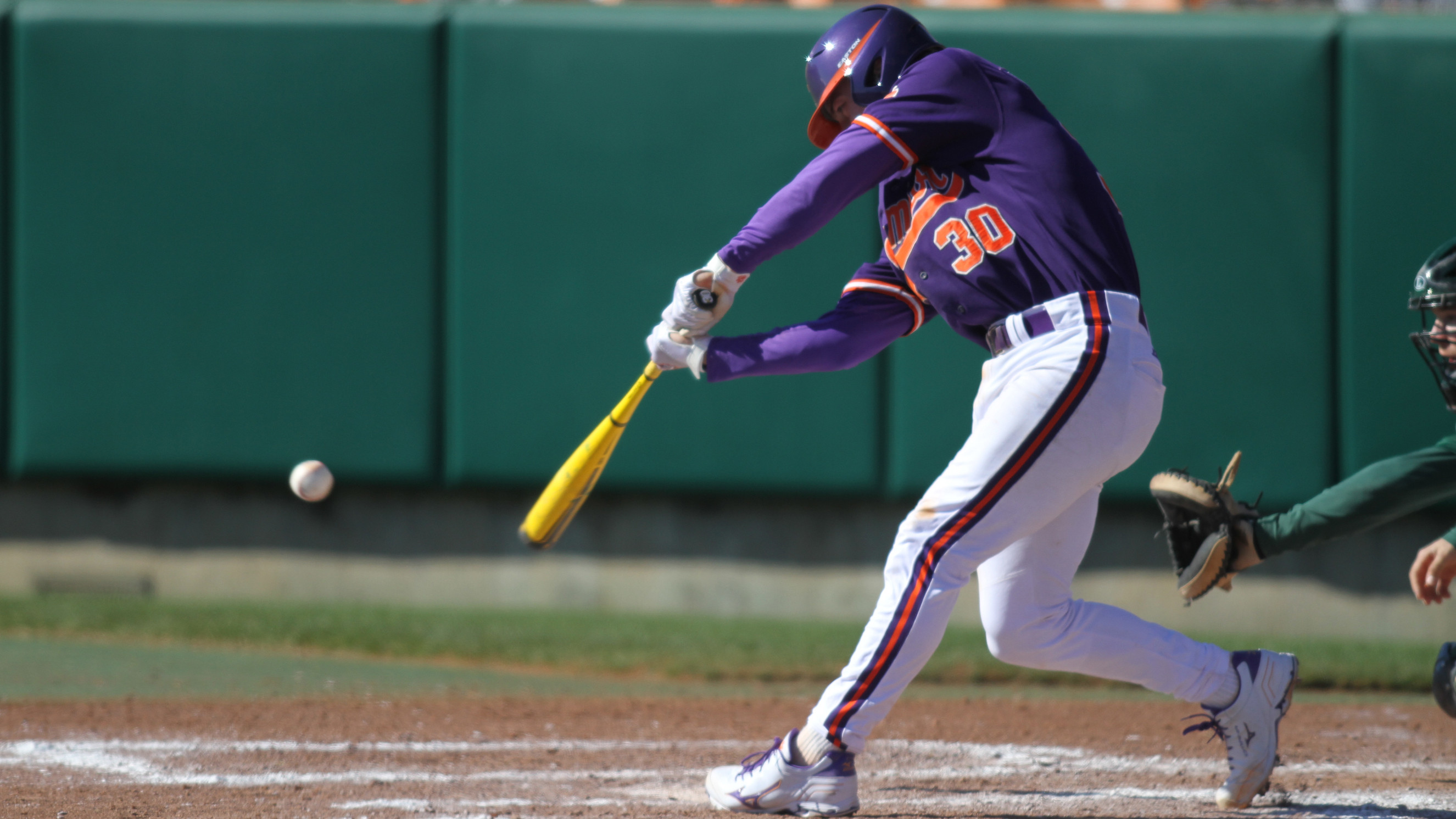 Garrett Boulware‘s single with two outs in the ninth inning plated Thomas Brittle to give Clemson a 7-6 walkoff win over #12 Virginia in front of 5,006 fans at Doug Kingsmore Stadium on Saturday night.  The Tigers, who evened the series 1-1, improved to 11-6 overall and 3-2 in the ACC.  The Cavaliers, who saw their nine-game winning streak in the series come to an end, fell to 16-2 overall and 3-2 in ACC play.

Virginia scored two runs in the top of the first inning, but Clemson responded with three runs in the bottom of the first.  The Tigers later built a 6-3 lead with a run in the fourth inning.  The Cavaliers chipped away with two runs in the fifth inning and the tying run in the eighth inning.  Brittle led off the ninth inning with a single and came around to score the winning run on Boulware’s two-out single to the gap in right-center.

The one-run victory gave Jack Leggett his 1,235th career win as a head coach.  Leggett moved into a tie with Larry Cochell for 12th place in NCAA history in all-time wins by a head coach at a Division I school.

Nathan Kirby (1-1), the fifth of six Cavalier pitchers, suffered the loss.  He yielded two hits, one run, and one walk with two strikeouts in 1.1 innings pitched.

The Cavaliers dented the scoreboard first with two two-out runs in the top of the first inning.  Jared King lined a one-out single to right-center and advanced to second on Derek Fisher’s groundout to second.  Brandon Downes then ripped a two-out double to left field to score King.  After Joe McCarthy walked on four pitches, Mike Papi lined a single to left field to score Downes.

In the bottom of the first inning, Steven Duggar and Steve Wilkerson both grounded one-out singles up the middle, then Boulware grounded a triple over the first-base bag to score Duggar and Wilkerson.  Shane Kennedy followed with a line-drive single to left field to plate Boulware and give Clemson a 3-2 lead.

Brittle reached as the leadoff batter of the second inning when third-baseman Nick Howard’s throw to first base was errant on Brittle’s bunt.  Brittle, who advanced to third base on the error, scored on Tyler Slaton‘s sacrifice fly to left.

King led off the top of the third inning with a hit-by-pitch and Fisher walked.  Downes moved the runners up a base with a sacrifice bunt, then McCarthy grounded out to first to score King.

Boulware answered with a home run to left field to lead off the bottom of the third inning, his third long ball of the season.

Brittle led off the fourth inning with a single through the right side, advanced to second on a wild pitch, and moved to third on Slaton’s sacrifice bunt.  After Jay Baum walked, Duggar lined a single to center to score Brittle.

In the fifth inning, Downes led off with a single to right-center on an 0-2 pitch, then McCarthy grounded a triple over the first-base bag to score Downes.  Papi then drove home McCarthy with a sacrifice fly to center, cutting Clemson’s lead to 6-5.

Howard led off the eighth inning with a double down the right-field line and advanced to third after Wilkerson booted Reed Gragnani’s grounder.  Nate Irving grounded into a 6-4-3 double play, but Howard scored the tying run on the play.

Brittle led off the ninth inning with a line-drive single to center and advanced to second on Slaton’s sacrifice bunt.  Baum was intentionally walked, then Duggar struck out looking for out #2.  Wilkerson reached on an infield single to load the bases, then Boulware belted a 2-0 pitch to the gap in right-center to plate the winning run.

Clemson and Virginia will play game-three of the three-game series on Sunday at 1:00 PM.  The game will be available live via webcast on ESPN3.