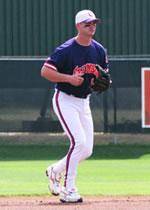 Clemson, SC- Clemson’s bottom four batters in the lineup sparked the Tigers to a 9-4 victory over #6 South Carolina in front of 5,107 fans at Doug Kingsmore Stadium on Wednesday. The 6-9 hitters were a combined 10-16 with six runs scored and four RBIs. The win was the ninth consecutive for #23 Clemson, who improved to 18-10 overall. South Carolina fell to 23-6 with the loss.

Josh Cribb (2-0) earned the win after entering in the fourth and shutting down the Gamecock offense. Cribb pitched 5.0 flawless innings, striking out four and walking none. He gave up just two hits and no runs. In fact, South Carolina had just five hits over the last seven innings of the game. Aaron Rawl (6-2) got the loss after giving up four earned runs in just 1.1 innings pitched.

The bottom four hitters were responsible for 10 of Clemson’s 15 hits. Andy D’Alessio, Russell Triplett, and Garrick Evans each had three hits, while Tony Sipp had two RBIs. Leadoff hitter Herman Demmink was 2-5 with three RBIs. For the Gamecocks, Steve Pearce had three base hits and Davy Gregg had two.

South Carolina threatened in the first. Landon Powell roped a single through the right side that rolled to the right field fence. However, right fielder Tyler Colvin slid and grabbed the ball and tossed it quickly into the infield to save a sure run. The Tigers capitalized in the bottom of the frame after Demmink led off with a solo shot to right field, his third of the season. It marked the first time a Tiger led off against South Carolina with a home run since Ryan Riley did it in March of 2001.

The Gamecocks answered in the second inning. Ryan Mahoney hit a two-run homer to right field, the first of his career, to give South Carolina a 2-1 lead. Pearce made it 3-1 after a single through the left side to score Bryan Triplett. Clemson starter Kris Harvey avoided further damage when the Gamecocks stranded three runners. Tommy King upped the Gamecock lead to 4-1 in the third inning, singling home Mahoney.

Clemson scored a pair of runs over the fourth and fifth innings. The Tigers got one in the fourth after Russell Triplett slapped a hard single up the middle. The difficult hop got past Gamecock shortstop Triplett. In the fifth, after a pair of singles, Brad McCann hit a sacrifice fly to right field to score Evans from third.

The Tigers regained the lead after the sixth inning. The first run scored after Gamecock third baseman Pearce bobbled a possible double play ball. Then, Demmink added an RBI after grounding into a fielder’s choice. The two runs gave Clemson a 5-4 lead.

Lou Santangelo extended the lead to 6-4 in the seventh with a blast to centerfield, his ninth homer of the year. Then, following base hits by Triplett and D’Alessio, left fielder Sipp dropped a single in right center field for his second RBI and a 7-4 Tiger lead. Evans also had an RBI base hit, giving the Tigers two runs with two outs. The Tigers tacked on their fourth run of the inning after Demmink drove in his third of the game. Clemson hit five straight singles with two outs in the inning.

Clemson hits the road for the first time this season in ACC play, as the Tigers travel to Charlottesville to take on the Virginia Cavaliers. First pitch on Friday is scheduled for 7:00 p.m.