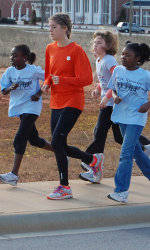 On February 8, Kate Borowicz, a redshirt sophomore on the cross country team, had the opportunity to visit Blue Ridge Elementary School to speak to the Ridge Runners running club. Below is what she wrote about her experience:

“I got to share my story of running as it relates to both honor and self control. The responses and reactions that I received from the girls were incredible. They were so warm and inviting to me, and all had such energetic hearts about their new running club. Afterwards, they took me outside and guided me around their practice loop. Their goal of running a 5K at the end of the year was so positive and their smiles left such an impact on me. I can’t wait to go back to talk to them and to see how they progress.”

The Solid Orange Squad will be returning to Blue Ridge Elementary on February 29, to talk to the club again. Although this is not a typical assembly program, the track and field athletes are still able to teach some of the T.I.G.E.R! character traits. The focus on setting goals and exercising really demonstrates respect, and Kate was able to touch on this during her visit.

SOS has been preparing for several big events that are quickly approaching. Boy Scout Day will be held on Saturday, February 25, where nearly 2,000 Boy Scouts will come to Clemson to tour the athletic facilities, meet student-athletes and hear from a speaker. The Be A T.I.G.E.R! Field Day is also in just two short months. It will be held on Saturday, April 14, the day of the spring football game. The Clemson student-athletes are working hard to plan an event that is both fun and educational for the children that attend.