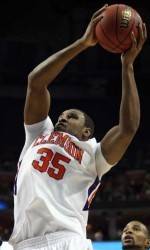 CLEMSON, SC – Former Clemson standout Trevor Booker has been invited to participate in the 2010 NBA Draft Combine this week. The event will be held Wednesday, May 19 through Sunday, May 23 in Chicago, IL. Booker will be one of approximately 50 players in attendance who will be evaluated for the upcoming NBA Draft, which will be held June 24 in New York City.

Booker attended his first private workout on Monday. He was in Milwaukee as part of an afternoon workout session for the Bucks franchise. Booker is also scheduled to work out for the Minnesota Timberwolves following the NBA Draft Combine.

Portions of the workouts from the Combine will be shown live on television. ESPNU will televise the event from 10:00 AM – 2:00 PM on Thursday, May 20 and Friday, May 21. On those same days, NBA TV will broadcast afternoon workouts from 3:00 PM – 7:00 PM.

Booker was a first-team All-ACC forward for the Tigers this past season, when he led Clemson in scoring (15.2 ppg) and rebounding (8.4 rpg) for the second straight year. He finished his career with 1,725 points and 1,060 rebounds, figures that both rank in the top five of Clemson basketball history. Booker also blocked 249 shots in his career, a top five figure in school history as well. He established a school record by starting all 134 games of his career.

Booker is listed as the No. 44 eligible draft prospect by expert Chad Ford of ESPN. He is projected as a second-round selection by both DraftExpress.com and NBADraft.net.