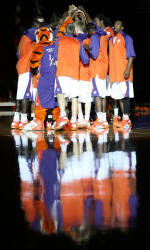 CLEMSON, SC – The men’s basketball team has been ranked among the preseason top 25 according to multiple publications and Web sites. The Tigers, who return 11 lettermen from a 23-win team last season, have made consecutive NCAA Tournament appearances for the first time since the 1996-97 and 1997-98 seasons. Practice gets underway for the Tigers on Friday, Oct. 16. The second annual “Rock the `John” season tipoff event will be held that night at Littlejohn Coliseum at 8:00 p.m. Admission is free to the event.

Oliver Purnell’s squad returns a pair of starters off last year’s team, including 2009 second-team All-ACC performer Trevor Booker. The senior out of Whitmire, SC is one of the top returning frontcourt players in the nation. He has been cited as a third-team All-American by CBSsports.com and as the nation’s seventh-best power forward by Lindy’s magazine. Booker, who was announced last month as a preseason All-American by both Blue Ribbon and FoxSports.com, has been dubbed the ACC’s most “underrated” player by Athlon magazine as well.