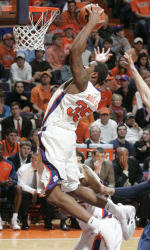 Booker, a native of Whitmire, SC, tied with Toney Douglas as the leading vote-getter for the All-Defensive Team. He is the ACC’s active leader with 203 blocked shots and is second in league history in total blocks among players 6’7″ or shorter.

Booker leads the team with 62 blocked shots and is third on the squad with 42 steals. He was one of only three players in the ACC with at least 40 blocks and 40 steals in the regular season. He is the first Clemson player named to the ACSMA All-Defensive Team since Vernon Hamilton in 2006.

This marks the second straight year Clemson has had a second-team all-conference choice. Last year, K.C. Rivers was second team and Cliff Hammonds was named to the third team. Booker is also the fourth player under Head Coach Oliver Purnell to be named to an All-ACC team. Sharrod Ford was a third-team selection in 2005.