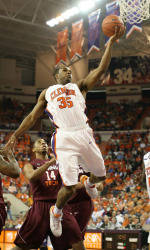 CLEMSON, SC – Senior forward Trevor Booker has been named to the preseason candidate list for the Naismith Trophy, presented annually to the nation’s top collegiate basketball player. Booker, a native of Whitmire, SC, was one of 50 players named to the list Thursday. It is the second preseason watch list Booker has been included on, as he was previously announced in August as a candidate for the John R. Wooden Award.

Booker is the leading returning scorer (15.3 ppg) for the 2009-10 Tiger basketball squad. He is coming off a junior season in which he led the ACC in field goal percentage (.571) and rebounds per game (9.7). He also averaged a double-double during the regular season of the ACC. Booker, a second-team all-conference selection last season, was one of nine players from the ACC named to the preseason watch list.

The watch list was compiled the Atlanta Tipoff Club, which based its criteria on player performances from the previous year and expectations for the 2009-10 college basketball season. The Naismith Trophy, presented by AT&T, will be awarded at the 2010 NCAA Men’s Final Four in Indianapolis, IN. Blake Griffin of Oklahoma won the award in 2009.

In late February, the Atlanta Tipoff Club’s Board of Selectors will compile a midseason list of 30 players. In March, the Naismith Trophy voting academy will vote to narrow the list to four finalists.